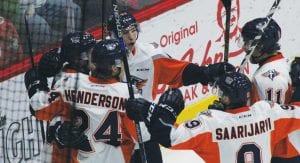 Flint players celebrate another goal against Erie on Sunday at the Dort Federal Event Center.

FLINT – The Ontario Hockey League’s Flint Firebirds made league headlines once again on Sunday; this time for the right reasons. Flint upset the OHL’s top team, the Erie Otters, 6-5 in Flint.

It all began just five minutes into the game, when Zach Grzelewski fired one home to give Flint an early advantage. Will Bitten added his 11th of the season just a few minutes later to add another to the Firebirds’ lead.

The Otters, though, got one back with a goal from Jakob Mayenschein before Bitten’s second goal of the night put Flint up 3-1 after one period of play.

Erie wasted little time getting back into the game as one of the OHL’s top players, Alex DeBrincat, scored on the power play just :26 into the second frame. The Otters then drew even with a Dylan Strome goal just two minutes later, changing the complexion of the game rather quickly.

That’s when Flint’s Nicholas Caamano buried one to grab the lead back, and capping off the second period scoring was Erie’s Travis Dermott, making it a 4-4 game with one frame remaining.

The early moments of the third period, though, were dominated by Flint. The Firebirds took the lead back with a tally from Francesco Vilardi at 2:03 before Bitten finished off the hat trick at 4:37.

Strome would add one more for Erie just a minute later, but that would be the game’s final goal. In net, Kyle Keyser got the win with 40 saves.

The Firebirds returned to the Dort Federal Credit Union Event Center on Saturday and took a tough 4-1 loss to the Barrie Colts as a blizzard struck the entire area.

The first period resulted in a scoreless deadlock before Ben Hawerchuk scored the game’s first goal near the midway point of the second period to give Barrie the lead. About five minutes later, the Colts’ lead was doubled with a goal from Brendan Lemieux.

Connor Chatham got on the board for Flint in the later moments of the third period to draw back within one. That, however, was short lived. Lemieux scored again just seconds later and then capped off the hat trick with an empty netter at 18:33.

Last Friday night was a much different story as Flint dismantled the Guelph Storm on the road, 5-2. Ryan Moore continued his stellar season with a power play tally at 7:10 of the first before Guelph responded with a goal from Nick Deakin-Poot just over a minute later.

Then in the second period, the Firebirds began to soar, starting with a Mathieu Henderson goal on the power play before Moore recorded another power-play goal two minutes later. Grzelewski found the back of the net early in the third to extend the Flint advantage.

Luke Burghardt was able to bury one for Guelph on the power play to make it a 4-2 Flint lead in the third before Zack Pittman’s empty netter put the Storm away. Alex Nedeljkovic posted 26 saves to record the win.