Firebirds warming up: Win two in a row, four of last seven 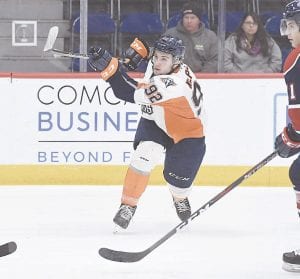 Flint’s Fedor Gordeev was traded over the weekend to the Guelph Storm for future draft picks. Photo by Todd Boone/Flint Firebirds

FLINT – A weekend home stand turned out to be just what the Flint Firebirds’ OHL hockey team needed, winning its second game in a row with a 6-4 win over the Sault Ste. Marie Greyhounds on Sunday.

Flint exploded out of the gate with a 3-0 first period. Jake Durham netted the first one just 5:13 into the game before Michael Bianconi upped it to 2-0 less than two minutes later. Durham then registered his second of the night, while Riley McCourt opened the second period with his fifth tally of the season to make it 4-0.

Soo finally began to respond with a goal late in the second and another early in the third. A minute later, Flint’s Vladislav Koyachonok tickled the twine on the power play, his first goal of the year. The Greyhounds pulled back to within one with a pair of goals late in the third, but Eric Uba buried the empty netter to put it away.

Flint fell behind early, but then dominated the rest of the way in a 5-1 win over the Sudbury Wolves at home on Saturday. Sudbury scored 6:45 into the game and that ended up being the last glimmer of hope. Hunter Holmes tied the game up late in the first frame and Jack Wismer’s goal 0:36 into the middle period gave Flint the lead.

Durham scored just over six minutes later and Ethan Keppen added one late in the stanza. Kyle Harris recorded the only goal of the third period.

The Firebirds are still in last place at 7-32-2-0 for 16 points. They’re at Windsor on Thursday and host Hamilton Friday and Sarnia Saturday.