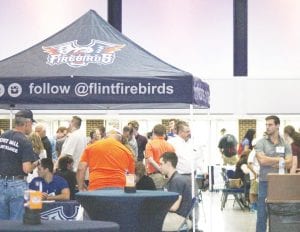 A party takes place in the lobby of the Dort Federal Event Center for the Flint Firebirds’ Open House last Thursday.

FLINT – The Ontario Hockey League’s Flint Firebirds held an open house on Thursday, Sept. 1 to bring the community to meet the players and coaches, check out the facility and pick their seats for season tickets for the upcoming season, which begins Sept. 21 at home against the in-state rival Saginaw Spirit.

There was a party in the lobby where players and coaches were signing autographs and there were food and drinks, and inside the arena, there were several seats marked off as already being sold for the upcoming season. On the playing surface, the ice hadn’t been put down yet, but there was street hockey equipment for kids to play with.

Not far from the youth playing street hockey, there was a bounce house for the younger ones to have a good time. The outside of the arena was where food was being grilled and the team’s famed Pontiac Firebird with the Flint Firebirds logo on the window sat out front.

The open house was not only to attract season ticket holders; it was also the final part of the team’s training camp as it led up to the preseason this past Friday at Iceland Arena against the Windsor Spitfires. Flint also had a preseason game on Sunday in Windsor and one last one this coming Friday against Saginaw at Iceland before their regular season opener on the 21st.

Training camp began on Monday as the players reported to the Dort Federal Event Center for medical and fitness testing before heading over to Iceland for practice. On Tuesday, the team competed in organized games against one another to help determine who will make this year’s roster. It was also the first day of the Firebirds’ Coach’s Show on Sports Xtra 1330.

Wednesday and Thursday also brought more on-ice sessions leading up to the open house. For more information on the team or tickets, visit www.flintfirebirds.com.