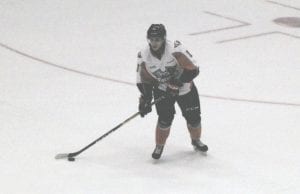 Flint’s Dennis Busby looks to clear the puck out of the defensive zone.

FLINT – The last two weeks have been huge for the Flint Firebirds, winning five of their last six and registering a point in the past six. That was capped off with a 4-2 win over the Guelph Storm at the Dort Federal Event Center on Sunday afternoon, thanks to a hat trick from Ryan Moore.

His first goal came just seven minutes into the game on a breakaway where he fired it top shelf for the early lead. That would hold up until early in the second period when Guelph’s Ryan Merkley buried one to draw even.

Moore would then get his second of the night when Ty Dellandrea passed it to him from behind the net, and Moore sent a laser of a wrist shot into the net. Early in the third, Fedor Gordeev’s wrist shot was deflected in by Maurizio Colella for the two-goal lead.

Nate Schnarr scored for Guelph at 12:52 of the final stanza, but Moore found a way to finish off the hat trick with an empty net tally. Garrett Forrest made 37 saves in net.

On Saturday at the Sault Ste. Marie Greyhounds, the Firebirds made an impressive comeback to once again defeat the Soo, 5-3. Late in the first period, an Alex Peters’ wrist shot found the top shelf to put Flint up but Blake Speers answered a couple of minutes later for a 1-1 tie after one.

Zachary Senyshyn would put Soo on top with a power-play goal at 13:56 of the second before Flint stormed back to take the lead again. Jalen Smereck would respond with his seventh of the season just a few minutes later and just over a minute after that, Kole Sherwood scored on a wrister to put Flint back on top.

Boris Katchouk added one for the Greyhounds to even things up heading into the third. That’s when Flint took control. Jake Durham’s shot squeaked through the five hole and Nicholas Caamano put it away with an empty net goal. Connor Hicks had 20 stops between the pipes.

The Firebirds hosted one of the top teams in the Ontario Hockey League, the London Knights, on Wednesday and let a lead slip through their fingers in a 4-3 shootout loss. It did, however, extend Flint’s point streak to four games.

Flint had its chances to win initially crafting a strong lead. Dellandrea notched a short-handed goal just 6:37 into the game, stealing the puck from the London goaltender behind the net and burying a backhander into the open net. Janne Kuokkanen scored for London later in the period to get the equalizer.

A couple of minutes after that, Sherwood sent an excellent saucer pass to Moore, who fired it top shelf to take the lead back. Early in the second, Dellandrea got back on the grind and found himself all alone with the goaltender, beating him on a forehand-to-backhand move.

The Firebirds went on the power play and seemed as if they were going to run away with the game. Sherwood scored on a one-timer, but the play went under review. It was reversed because the goaltender had pushed the net about an inch off the moorings before the shot was able to reach the back of the net.

That’s when the momentum shifted. London got back to within one on an Adrian Carobara goal late in the second and Mitchell Stephens scored with four minutes left in the game to send it to an extra period.

The win over Guelph boosted Flint into seventh place in the Western Conference standings at 26-21-1-4 for 57 points, one point ahead of Sarnia. The Firebirds were at Owen Sound on Wednesday following deadlines and will be at Saginaw on Friday and host Sarnia on Saturday.