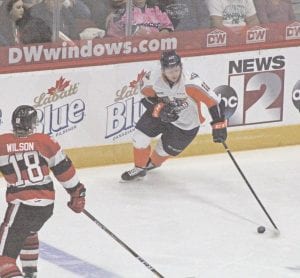 Flint’s Jake Durham lugs the puck out of the defensive zone during Saturday’s home opener.

FLINT – The Flint Firebirds’ home opener always draws quite the crowd, and once again they were treated to quite the contest. Saturday’s backand forth battle with the Ottawa 67’s came out if favor of Flint, netting the game-winning goal with just two seconds remaining in the extra period to secure the 5-4 win.

Once the pre-game festivities ended, it took little time for both teams to get the offense going. Less than four minutes into the contest, the Firebirds found themselves on the power play and then in the lead after Fedor Gordeev’s blast from the point found the back of the net.

Ottawa quickly responded with an Austin Keating goal a couple of minutes later, but just 13 seconds after that, Nicholas Caamano put the Firebirds back on top after being set up by Ryan Moore. Ottawa’s Graeme Clarke added one later in the period to send the game into the first intermission with a 2-2 deadlock.

In the second period, it took just 38 seconds to break the tie. Travis Barron’s goal gave the 67’s their first lead of the night, but CJ Clark answered for Flint just over a minute later with his first goal of the season. Barron would grab the lead for Ottawa once more shortly after that with a power play tally, but Caamano got his second of the night at the 8:24 mark to eventually force overtime.

It seemed as if a shootout was inevitable as overtime ticked down to the final seconds, but with just two left on the clock, a solid pass from Maurizio Colella set up Ty Dellandrea’s game-winner, which sent the crowd at the Dort Federal Event Center into a frenzy. Garrett Forrest got the win between the pipes with 31 saves.

The win puts Flint at 3-0-0-0 for six points, placing them in second in the West Division, just one point behind Sault Ste. Marie. Flint will now hit the road for a while, traveling to Peterborough on Thursday, Kingston on Friday and Ottawa on Sunday.