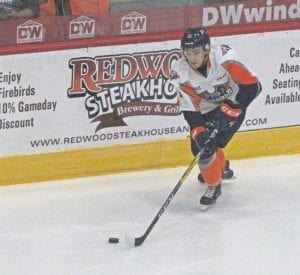 Flint defenseman Dennis Busby skates the puck up towards the neutral zone.

ERIE, PA – The Flint Firebirds were on a three-game winning streak before this past weekend and were even tied for first place in the Ontario Hockey League. That changed this past weekend with a pair of competitive losses on the road, most recently to the Erie Otters on Saturday, 5-3.

Flint would open the scoring when Ryan Moore got a steal in front of the net and put it under the goalie’s pads for the early lead. That, however, would quickly dissipate. Just a few minutes later, Erie’s Alex DeBrincat scored his third of the season, and just 16 seconds later, the Otters took the lead with a goal from Brett Neumann.

Gera Poddubnyi put Erie up 3-1 before Flint looked to cut into the deficit as Moore got his second goal of the night off a feed from Nicholas Caamano. DeBrincat’s second goal of the game would put Erie back up by two near the midway point of the second stanza. Late in the second, Luke Kirwan’s backhand from the left faceoff circle found the mesh and brought Flint to within a goal.

Unfortunately for the Firebirds, the only goal of the final period would be an empty net tally from Erie’s Taylor Raddysh.

On Friday night, Flint held a two-goal lead but was unable to keep its grasp on that advantage in a 3-2 shootout loss at the Mississauga Steelheads. Kole Sherwood would be first to light the lamp as he buried it after a pass put the puck on his stick in the crease with a gaping net sitting in front of him.

Late in the second period, Moore would shelf a wrist shot from the faceoff circle to double the Firebirds’ lead, but that’s when the momentum began to shift. The Steelheads scored twice in the final five minutes of the game on goals by Austin Osmanski and Sean Day to force overtime and eventually a shootout.

Sherwood was able to score Flint’s only goal of the shootout, but Michael McLeod and Nathan Bastian each tallied to finish off the comeback. Connor Hicks was great in net, making 40 saves on 42 shots on goal.

The losses dropped Flint back to third in the West Division and fourth in the Western Conference at 4-2-0-1 for 9 points. The Firebirds are at Windsor on Thursday before returning home for games against Mississauga on Friday and Barrie on Saturday.