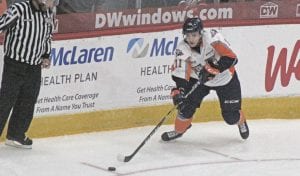 Flint’s Dennis Busby looks to move the puck out of the defensive zone.

FLINT – It was an exciting weekend to be at the Dort Federal Event Center. The Flint Firebirds’ young talent is really beginning to shine and it was on full display over the weekend, most recently in a back-and-forth game with the Windsor Spitfires on Saturday afternoon that resulted in a 4-3 overtime victory for the Firebirds.

Flint wasted no time getting started, scoring just 18 seconds into the game. Alex Peters sent the puck to Luke Kirwan behind the net, who skated to the side of the net and found a way to put it between the goaltender and the post. It took until the final minutes of the frame, but Windsor evened the score on a Logan Stanley goal.

The Spitfires rode that momentum in the early moments of the second period also, taking the lead on a tally from Julius Nattinen. Kole Sherwood would bring it back to a tie for Flint after firing a bomb from the blueline in the third, but less than a minute later Gabriel Vilardi’s goal took the lead back for the Spitfires.

Later on, it was Ryan Moore’s turn as he skated up from behind the net and scooped up the loose puck before putting it between the goaltender’s pads to draw even, which eventually forced overtime. That’s when the excitement kicked up. Jalen Smereck flew into the zone and received a pass from Everett Clark before firing in the game-winner. It was Smereck’s first of the season and as a Firebird.

On Friday for Military Appreciation Night, the Firebirds had quite a similar performance in a 4-3 shootout win over the Peterborough Petes. The action started quickly when Jake Durham got his first career Ontario Hockey League goal after deflecting Mathieu Henderson’s slap shot into the back of the net.

Later in the period, Hakon Nilsen got his first goal in the OHL as well, sniping a wrist shot from the point for a 2-0 Flint lead. That lead held up until the third period. Jonathan Ang put one in to cut the Petes’ deficit to 2-1. Just 21 seconds later, Clark would put it back to a twogoal advantage, faking out the goalie before putting it into the top shelf.

That’s when things began to change as Ang scored twice more, recording the hat trick and forcing overtime, and eventually, a shootout. Flint goaltender Garrett Forrest was able to stop all three Peterborough shooters. Moore’s opening round shot through the five-hole would prove to be the game-winner.

The pair of wins was a big deal in the standings as Flint improved to 11-8-0-1 for 23 points, putting it even with the Kitchener Rangers in the point’s race and only two behind the Sault Ste. Marie Greyhounds, who are sixth and fifth in the Western Conference, respectively. Flint is seventh in the conference and fourth in the West Division.

Flint is back on the ice on Thursday to host the Sarnia Sting before a Friday home contest against the Owen Sound Attack.