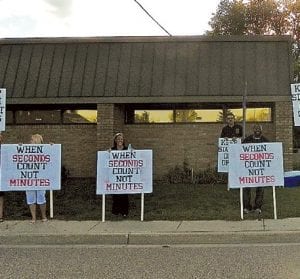 Flint Township firefighters and supporters picketed outside the municipal building, passed out fliers and voiced their grievances during the township board meeting Monday night.

About 25 firefighters and their supporters passed out fliers on the street then aired their grievances during the public comment portion of the board meeting.

“Despite a $3.6 million fund balance, the township board is considering laying off full-time firefighters and closing the main fire station,’’ stated the flier picketers were distributing.

“Your Flint Township professional firefighters are already doing more with less and the Township Board wants to make more dangerous and unnecessary cuts to the fire service.”

Picketers said the township currently operates with minimum staffing of one firefighter per station, per shift, for a total of 11 full-time firefighters.

“In the event of injury, or illness, stations have been staffed by overtime (in the past), but now are being closed,’’ the flier stated, also noting that overtime could be eliminated if more fulltime firefighters were hired.

Other than during public comment, the picketers and fire service reductions were not discussed during the board meeting. Township Supervisor Karyn Miller said she wanted to state for the record that the board has no intention of closing fire Station One, 5331 Reuben, directly behind the township offices. Officers are stationed roundthe clock at the stations at 3327 Flushing Rd. and 2511 Bristol Rd., she said. If personnel at Station One call in sick and the department has exceeded its overtime budget, then Fire Chief John Ringwelski has been directed not to staff it, she said. That’s happened 11 times in the past six weeks, she said.

When asked after the meeting, Miller addressed other claims made on the flier and explained the budgeting rationale.

She acknowledged fire stations are manned by one person but supported by on-call firefighters when needed. She also pointed out that the fire department averages 2-3 runs per day and that the average response time is about five minutes compared to seven minutes or longer in other local municipalities.

Faced with projections of being over budget at the end of the year, Miller said the board “has to do something.”

She confirmed that some layoffs may be coming by the end of the year. The board had hoped to get concessions from Local 1425 of the International Association of Fire Fighters union which recently rejected a proposed collective bargaining agreement. Miller said 70 percent of the fire budget is wages and benefits.

“We don’t have the funds to hire new firefighters,’’ she said.

The township has not laid off employees but cut its fire and police budgets this year due to dwindling revenues which is expected to continue for several more years, depleting the current fund balance.