Firefighters practice regularly to be ready for real events 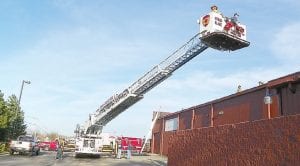 The Flint Township Fire Department recently practiced their skills on this abandoned building on Miller Road.

FLINT TWP. — With lives at stake, every second counts and firefighters must be prepared to respond quickly to many different scenarios.

At the scene is not not the ideal place to sharpen those skills.

That’s why Flint Township firefighters were swarming over the rooftop of a vacant commercial building on Miller Road last week.

With an assist from Grand Blanc firefighters, who brought in their 100-foot ladder truck, the firefighters practiced ladder training at the vacant store.

“We do this to keep our skills up,” said assistant fire chief Mike Burkley. Training is held twice each month and covers all realworld scenarios, Burkley said.

One of the exercises they practiced last week was rescuing a mannequin “victim” from the roof using the ladder truck.

Three Grand Blanc firefighters were on hand to help with operating the truck. They helped load the dummy into the bucket, transport it to the roof, then rescue it and bring it down again.

Chris Hyde, a Grand Blanc truck driver and operator, said it takes three to five minutes to set the truck up once it arrives at the scene of a fire.

All firefighters at the practice seession were wearing full gear including steel-toed boots.

A second group of firefighters practiced hoisting the 35-foot ladder off the truck to its full height, leaning it against the wall and advancing a fire hose up the ladder to the top.

In upcoming training sessions , the department plans to tour hazardous waste sites and will conduct a walk-through at Genesee Valley Center, Burkley said.

He obtained permission to train at the MIller Road building from Pep Boys auto repair and supply, which owns it. The building has been vacant over a year and last housed a furniture store.