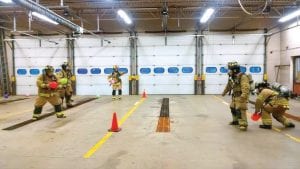 FLINT TWP. — A recent game of dodgeball at a Flint Township fire station was not about firefighters just having fun.

It was a training exercise designed to help them practice air management by learning to control breathing while doing a physical activity, said Mike Burkley, assistant chief.

Suited up in full gear including air packs (Self Contained Breathing Apparatus) the fire fighters played ten-minute rounds. Playing in two teams, the object was to throw balls at each other and try to hit someone on the opposing team while avoiding being hit when the ball was thrown back.

According to the rules, if hit by a ball, the player was “out” of the game. To get back in, they had to walk while carrying two water can extinguishers 100 feet out of the building and back in — all while controlling their breathing.

Also, if a player caught a tossed ball, the person who threw it was out.

The team with the most air remaining at the end of the exercise was the winner. The winning team received a New York Fire Department FDNY “Never Forget” sticker to wear on their fire helmets.

“Fire fighters consume a lot of breathing air when entering a structure filled with smoke,” Burkley said. They also have to drag tools and a hose line around. “The longer their air lasts, the longer the fire fighter has to find and fight a fire.”

Playing Dodge Ball also doubled as a team building exercise for the fire fighters to learn to work together, Burkley said.

He took the opportunity to add that the department is continuously accepting applications for more on-call fighters. Anyone interested can apply at www.flinttownship.org or call 810-732- 4413 for more information.