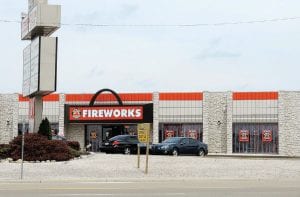 Motor City Fireworks has moved in as the second permanent fireworks store on Miller Road.

FLINT TWP. — Business is literally booming along the busy Miller Road commercial corridor where Motor City Fireworks has opened a year-round store at 3490 Miller Road in the Ross Plaza, just a few doors down from Phantom Fireworks, 3392 Miller Road, an existing permanent store operating for the past few years.

Jake’s, which has other operations elsewhere in the county apparently could not get around the township’s moratorium on seasonal sales permits, established in late May to give the township Planning Commission time to review and find a workable plan for fairly handling a growing number of tent sales applicants.

Jake’s application was on the agenda the same night the township board voted the moratorium in place. The ban went into effect before Memorial Day and was not lifted prior to the Fourth of July, arguably the busiest fireworks selling period of the year.

As a result, few if any temporary fireworks tents can be found this year operating in township parking lots.

The Michigan Department of Licensing and Regulatory Affairs lists 41 registered fireworks retailers in Genesee County this year – 10 are permanent and 31 are temporary.

The Wal-Mart store on Corunna Road also is a permanent state licensee in Flint Township.

Despite the absence of tent sellers, there is no lack of places to buy fireworks. Motor City plans to stay open until at least midnight on the Fourth of July and Phantom is open seven days a week until 1 a.m.

For fireworks fan who prefer to just watch, upcoming scheduled display dates include July 3, at 9:30 p.m. in Flint, best viewed from Atwood Stadium; July 4 at dusk during Family Fun Day at the Clio City Park; July 4 at dusk during the Fenton Annual Freedom Festival at Silver Lake Park; and July 12 at 9:40 p.m. during the Mid-East Festival at Our Lady of Lebanon Maronite Catholic Church, 4133 Calkins Road.