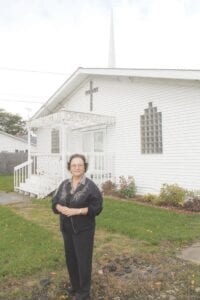 DAVISON TWP. — For a century the First Metaphysical Church of Davison has made its home in Genesee County, moving to Davison Township in the late 1940s.

As the church, now located at 8267 E. Atherton Rd. in Davison Township, celebrates it’s 100th birthday this month, the current pastor reflects on the history of the congregation and looks forward to a celebration when the threat of COVID-19 has lessened.

Head Minister/ Pastor Rev. Jean Bilbrey Genaw said the church was founded in 1920 as the Church of Spiritual Light in Flint, it was the second oldest spiritualist church in Michigan.

In 1947, founding Pastor Ernest Evans became ill and moved to the home of Nelson and Rev. Bertha Knapp on Atherton Road in Davison Township.

Rev. Knapp, assisted by co-pastor Rev. Kenneth Young, assisted in running the church until Knapp died in a car accident in 1953. Following this, Nelson Knapp married Rev. Ethel Bower in 1955 and under their leadership the church’s membership grew.

At the time they were conducting services from their home, but as the size of the congregation grew, Knapp dedicated some of his land on the farm he owned on Atherton Road to build the existing church.

Genaw said the church was dedicated on Easter Sunday, April 1, 1956.

One month and one day later, the church was destroyed when a tornado swept down Atherton Road.

“The only thing you could see was the back wall that was left standing,” said Genaw. “And with no insurance, because all of the money was spent on building the church, the Knapps sold off land and donated most of the cost to the rebuilding of the church.”

In 1963, Genaw said the Knapps sold their homestead and built a home on the westside of the church and financed the building of the hall that is attached to the church. It was completed and dedicated as “Harmony Hall” on Jan. 5, 1964.

One of the features found in Harmony Hall is the church’s icon – a statue of Mother Mary that travelled all around the world with Pope John Paul II. Genaw said it was given to the church by a Catholic church and it is customary at the end of each service that the statue spends time with a different person in the congregation.

However, during the coronavirus shutdown, Mother Mary has remained in her cabinet in the hall, available there for parishioners to pray with.

Pastors have included Glenn Cooley, Rita Jordan and Bonnie Nighorn. Genaw said she has been a member since 1961 and has served more than once as Head Minister/Pastor.

“I’ve been here a long time,” she said. “I just became pastor again, head minister. We elect our people.”

Genaw explained the church teaches spirituality and not specifically one denomination.

“We are different people of different philosophies,” she said. “Some are into the folklore of the (Native Americans), some are into Buddhism and there are, of course, Christians. It’s a conglomerate of faiths, all together, and it works. We don’t think anybody is really strange.”

Genaw said the spiritual path is one of life, love and forgiveness. It’s also about moving on to become better spiritual people – or as she likes to call it, spiritual beings learning how to be humans.

The Golden Rule in the First Metaphysical Church, said Genaw, is you can do anything you want to do as long as you harm no one, including yourself.

The current congregation numbers between 30-50 she said. As with many churches, COVID- 19 has caused the church to scale back many of its activities, so a 100-year celebration is still in the works, possibly for next year.

The church is planning a psychic fair, Nov. 14, from 11 a.m.-6 p.m. She said it will be a small event and there will be vendors and readings.

Genaw said the church is trying to get people to come back as services are now offered on Sundays with a healing service from 6-6:30 p.m. and regular services from 6:30-7:30 p.m.