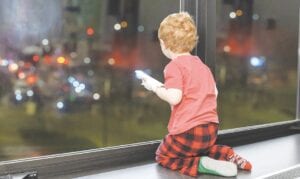 Jackson Pope, 3, watches the parade of first responder vehicles from his window at Hurley Children’s Hospital, where he is a patient. Photos courtesy Doug Pike

FLINT — First responders from across the area joined a parade, Dec. 21, to make Christmas week special for kids at Hurley Children’s Hospital.

When Murray told him the Glow event had been canceled due to the pandemic, they both decided to put something together.

“Being in the hospital can be tough on kids, especially during the holidays. Here at Hurley Children’s Hospital we are always looking for ways to make our pediatric patients feel special. Having Santa make a special trip to the hospital, even socially distanced outside, reminds our young patients that they aren’t forgotten. They are loved and everyone is pulling for them to get better,” said Laura Jasso, Administrator Marketing and Community Relations.

“We both reached out to our circles and were able to put together an emergency vehicle parade ending with Santa on a firetruck,” said Murray. “As for Santa, he owed me a favor. I got him out of a parking ticket a few years back. He left his sleigh unattended in a fire lane.” 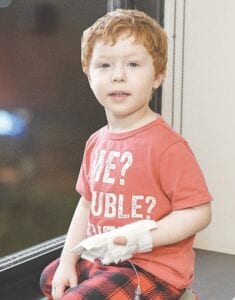