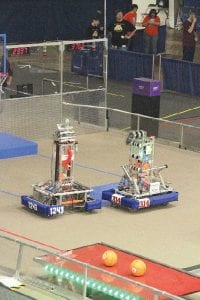 Big Mo Team 314 and the Dragons Team 1243 of Swartz Creek work together to try and gain some points by shooting basketballs into the hoops.

FLINT — Carman-Ainsworth High School’s Big Mo Team 314 and Flint/Flushing’s Aftershock Team 468 faced off against 37 other teams at the 2012 FIRST (For Inspiration and Recognition of Science and Technology) Robotics District Competition held March 2-3 at Kettering University.

The competition — one of 10 district robotics competitions in Michigan — required the 39 participating robotics teams from across Mid-Michigan to design and build robots capable of launching compact basketballs at four hoops, positioned at different heights, to earn points in the contest.

The first place finish was awarded to the three-team alliance comprised of the Enginerds Team 2337 of Grand Blanc, the Killer Bees Team 33 of Auburn Hills and rookie team Star Trec Team 4294 from Lansing. 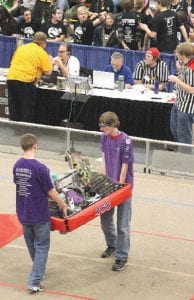 Taking home the silver medals with a second place finish were the Eagle Imperium Team 3322 of Ann Arbor, Lightning Robotics Team 862 of Canton and the Spartan Sprockets Team 3601 of Webberville.

The Raptors Team 1711 of Traverse City won the Chairman’s Award, qualifying the team for the state finals in April.

The state championships will take place in Ypsilanti April 12-14 and the national championship is scheduled for St. Louis, Mo., on April 26-28.