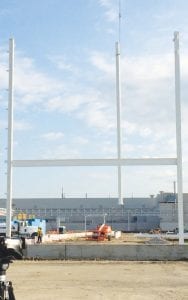 FLINT — Using a crane that would tower over Flint’s tallest buildings at 260 feet, ironworkers installed the first structural steel for Flint Assembly’s new paint shop on Monday, according to a press release.

During the next six months, ironworkers with Midwest Steel will assemble 12,000 pieces of steel, using 130,000 structural bolts. In total, 10,000 tons of structural steel will be used in the project.

“To put it another way, the steel we are using would weigh as much as 2,857 GMC Sierra 2500 HD pickups produced at the Flint Assembly plant,” said Kathleen Nicholson, project manager with GM’s Global Facilities organization.

Steel installation is getting underway three months after GM and its general contractor Gallagher- Kaiser (GK) broke ground on the plant, which is located south of Flint Assembly on the site of the former Flint V-8 Engine Plant.

In December 2013, GM announced plans to invest $600 million in Flint Assembly for various plant projects, including the new paint shop. Since the ground breaking, construction workers have completed 373 of 440, 40-foot-deep caissons to support the mammoth structure.

While the finished plant will have a footprint of about 600,000 square feet, the facility will actually boast 1.3 million square feet of floor space on three floors.

The project is slated for completion in late 2016.

For anyone who wants to watch the construction progress, GM and GK have installed time-lapse cameras to record the project.