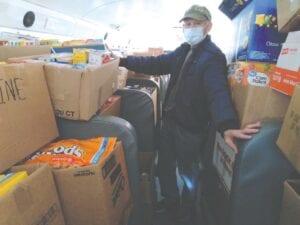 GRAND BLANC — FISH of Grand Blanc volunteers were blown away by the outpouring of concern from the community members who contributed to the annual Feed a Bus food drive Saturday, Nov. 21.

“It was phenomenal, with a capital P,” said FISH President Barb Smith.

Last year, donors filled a school bus with food and personal care items. This year, they filled a bus and a 16-foot truck.

“There was not a space left in the bus,” Smith said. “We packed food under the seats and to the ceiling.”

As of Sunday night, volunteers had weighed nearly 10,000 pounds of food and they were still counting.

Police and firefighters pitched in to collect monetary donations from passersby. Cash and check donations totaled some $9,000.

“There is an awareness of the need in this community,” said Smith.

The Grand Blanc Community Schools has a 22.7 percent poverty rate, she said. FISH once provided food for 150 to 175 people bi-weekly. Now, that number is a staggering 500 people per week.

“We expect that number to rise in the next month,” Smith said. “The need is there.”