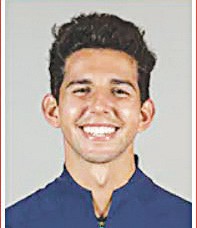 TOKYO — Former Grand Blanc runner Grant Fisher may not have come away with any medals in his first Olympics competitions, but he still gave a strong showing for his country.

Fisher, representing Team USA’s Men’s Track and Field team at the 2020 Olympic Games in Tokyo, Japan, advanced to the finals of Men’s Olympic 10,000- meter race on July 30 and the Men’s 5,000-meter race on Aug. 6. Fisher finished fifth in the 10,000-meter race and placed ninth in the 5,000-meter event, which were both held at Tokyo’s Olympic Stadium.

Despite entering just his third official 10,000-meter race, Fisher finished as the top American in the final with a time of 27:46.39. Ethiopian runner Selemon Barega captured gold in the event with a time of 27:43.22, while Uganda’s Joshua Cheptegei and Jacob Kiplimo took silver and bronze, respectively.

“I was just trying to race without fear, put myself in there and give myself a shot at the end,” Fisher, 24, said in an interview with teamusa.org. “I was really happy with it.”

Fisher, a former NCAA champion and 12-time All-American at Stanford University, qualified for the 2020 Olympics earlier this summer with a pair of second place finishes in the 10,000-and 5,000-meter races at the U.S. Olympic Track and Field Trials in June.

As a standout runner at Grand Blanc, Fisher won seven state championships and broke many state track and field records. He currently trains with the Portland-based Bowerman Track Club.