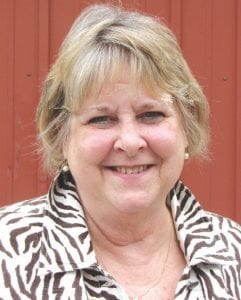 LAPEER TWP. — Karen L. Fitzgerald has joined the View Newspapers family of papers as Director of Advertising. She brings a lifetime of newspaper industry heritage and decades of experience in advertising and sales.

Fitzgerald comes to the View family of publications after more than 21 years at the Flint Journal where she was a multimedia advertising sales consultant.

“ We sold it all,” said Fitzgerald referring to a breadth of advertising avenues reaching from classifieds to retail to visibility on the internet.

In coming to View Newspapers, Fitzgerald is returning to some very solid roots. Fitzgerald grew up in Lapeer, steeped in the newspaper industry.

Her dad, Jim, was editor of The County Press in Lapeer for 25 years. She can recall helping out in the back room as a youngster.

“I started out at The County Press at age 5,” said Fitzgerald. She remembers helping out with tasks like emptying wastebaskets and filling the pop machine. The early experiences in the world of newspapers and her dad’s perspective impacted her whole family.

“He had an exuberance about his job here…. He brought us up that you look at the big picture. The work ethic he instilled in all of us — he was a great example. I learned a lot from watching him.”

Fitzgerald gleaned some of her advertising bent from her dad. “He started out in advertising.” At the same time, she brings a strong awareness of the connection between advertising and editorial.

“It’s just in our blood,” said Fitzgerald. “It’s been a wonderful ride. I can’t imagine doing anything else.”

After graduating from Lapeer Senior High, Fitzgerald attended Cleary College where she earned a business administration degree. She raised three kids while working part time at the Hart Journal/Oceana Herald. She started out typesetting and laying out ads, and took on front office management. She embraced a similar role later at Frankenmuth News, and she sold real estate as well.

In 1988, Fitzgerald became a full-time advertising sales representative for The County Press. Two years later she was recruited by the Flint Journal, where she has remained until this month.

And she’ll be doing quite a bit of that right away. In her new spot, Fitzgerald will be working with advertising representatives to serve the needs of local businesses and the community. Top on her priorities list is getting to know the customers and “listening to what they need from us.”

“I’m excited to get back into the communit … There are good people out there. It’s nice to see the small town atmosphere,” said Fitzgerald. The Mayfield Township resident is already a member of chambers of commerce in Davison and Flushing, and expects to get involved in the local ones as well.

In her down time, Fitzgerald loves a good who-dunnit to read. “I knit, and I love spending time with my family.” That includes her three kids and their families, with eight grandkids to spoil. She also enjoys spoiling her 9-pound Shitzu Yorkie, Sophie.

Her own folks are tickled pink to see her at The County Press, where she will work alongside publisher and brotherin law Wes Smith. “ They are so excited I’m local, that I’m back … (My dad) is just thrilled that Wes and I are both back here. This was his life for years.”

“It’s really wonderful to be back. I feel like I’m back home,” said Fitzgerald.