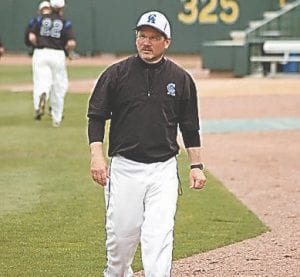 Fitzko receives this honor after 20 years and 362 wins as a varsity baseball coach in Michigan. The first 10 years of his career came at Bendle High School, where Fitzko coached a number of successful teams. During his tenure, Fitzko managed four district titles with four appearances in the regional finals, as well as four seasons finishing ranked within the top-10 in the state. Each season the Tigers lost in the regional tournament, it was either to an eventual state runner-up or champion team.

Following a successful stay at Bendle, Fitzko moved on to work as a counselor at Carman- Ainsworth, eventually taking over the head coaching job for the Cavaliers. Fitzko stayed with the Cavaliers for eight years before deciding to watch his son play for Swartz Creek.

As was the case with Carman- Ainsworth, Fitzko eventually landed in the head coaching slot with the Dragons, where he just completed his second season.

The Dragons made it all the way to the district final this season before falling to Saginaw Heritage. By winning the semifinal, though, Swartz Creek broke a school record for wins in a season, which now sits at 27 games.

Fitzko’s legacy is a strong one, holding the record for career wins at both Bendle and Carman-Ainsworth. But what makes this moment even sweeter is that Fitzko is being inducted alongside his longtime friend, Bob Foreback, who is the head baseball coach at Goodrich.

In addition to Monday’s ceremony, Fitzko was also honored at the induction banquet during the annual Michigan High School Baseball All-Star Game, which was held at Comerica Park on Tuesday. There, he will have his name engraved in a special section that will cement his legacy forever.