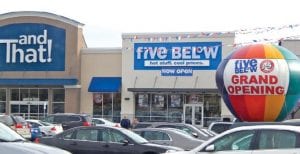 Five Below, a new store on Miller Road, joined and That! and Ulta in the Pirates Plaza, during a recent grand opening event.

FLINT TWP. — A Five Below discount store has opened in Pirates Plaza on Miller Road, completing the conversion of a former Circuit City electronics store into three separate stores.

Five Below is a trendy, value-priced store catering to teens and pre-teens. It takes it name from pricing of its merchandise at $5 bucks or less.

Five Below joined andThat!, a value-priced housewares store that opened in mid-October and Ulta cosmetics, a health and beauty discounter, that opened in late August.

The three new stores restore life to a space that sat vacant since Circuit City stores closed in 2009. The strip plaza is again fully occupied except for a unit formerly filled by Border’s bookstore which closed in September 2011. and That! stores are an affiliate of Bed, Bath and Beyond and operate in some locations under the name Christmas Tree Shops.