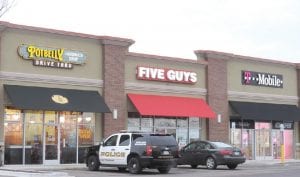 Five Guys Burgers and Fries set to open May 2.

FLINT TWP. — May 2 is the big opening day according to a sign posted in the window at Five Guys Burgers and Fries, 4140 Miller Road.

Another window sign indicates that job applications are being taken at www.fiveguysmi.com and interviews will be conducted on Tuesday April 26 starting at 11 a.m.

Five Guys joins a growing array of dining choice along the busy Miller Road commercial corridor and will complete the redevelopment of a former car sales lot.

A site plan approved in July 2014 for the five-acre site included construction of a standalone 7,162 square-foot Texas Roadhouse, which opened last August; and a separate 6,800 square-foot strip mall of three businesses. A Potbelly Sandwich Shop opened in one of the spaces last September and a T-Mobile cellphone store occupies the third spot.

Five Guys corporate representatives did not respond to a request for more information. According to its web site, Five Guys was founded in 1986 in the Washington D.C. area, and began offering franchisees in 2003. It has since expanded to more than 1,000 locations in 47 states and six Canadian provinces, plus more than 1500 units in development. The specialize in using only fresh ingredients include fries cooked in pure peanut oil. Nothing is frozen.

Formerly, the Miller Road site was occupied by Chinonis Chrysler Plymouth Dodge for many years, then Genesee Valley Chrysler-Dodge-Jeep- Ram and most recently as the short-lived Jim Waldron used car dealership.