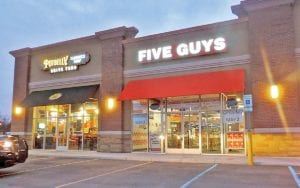 Five Guys don’t hold grand opening specials but it is now open daily from 11 a.m. to 10 p.m., said Lauren Lewis senior communications manager. About 45 workers have been hired and there is room for more, Lewis said. Interested applicants should go directly to the store to get an application or apply on snagajob.com.

“We are very excited to be opening in Flint, MI and are happy to bring our burgers and fries to our fans in the community,” Lewis said.

Five Guys is the last of four new businesses to open on the redeveloped five-acre site, formerly a cars sales lot.

According to its web site, Five Guys was founded in 1986 in the Washington D.C. area, and began offering franchisees in 2003. It has since expanded to more than 1,000 locations in 47 states and six Canadian provinces, plus more than 1500 units in development. The specialize in using only fresh ingredients include fries cooked in pure peanut oil.