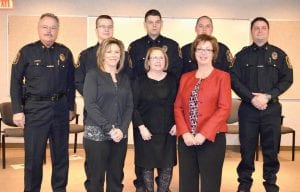 Those are the names of the township’s newest police officers who received conditional offers of employment on Monday. Four were sworn in on Tuesday.

The township board approved the hires at its Monday night meeting. The entry level officers will fill five of 11 vacancies on the police force, bringing the total number of sworn officers to 39, said Police Chief George Sippert.

Officer Pedersen is a graduate of Howell High School and holds an associate’s degree in Criminal Justice from Washtenaw Community College. He graduated from the Washtenaw Police Academy in December 2015. This is his first job in law enforcement.

Officer Brandon is a graduate of Grand Blanc High School. He holds an associate’s degree in Criminal Justice from Mott Community College and graduated from the Flint Police Academy. He most recently worked for the Saginaw Police Department but also has served as a police officer in the City of Flint, the City of Flushing, City of Eastpointe and Pittsfield Township.

Officer Taylor is a graduate of Genesee High School and Saginaw State Valley University where he earned a bachelor’s degree in Criminal Justice. He graduated from the Delta Police Academy in December 2015 and has not previously worked in law enforcement.

Officer Thompson is a graduate of Cedarville High School. He earned an associate’s degree in Criminal Justice a Delta Community College which included his police academy training. He also attended Saginaw Community College and studied athletic training. Most recently, he worked as a part-time police officer for the Fowlerville Police Department and the Metro Parks.

Officer McCallum graduated from South Lyon High School and Oakland Community College where she earned an associate’s degree in Criminal Justice. She holds a bachelor’s degree in Criminal Justice from Madonna University and a master’s degree in Law Enforcement Intelligence and analysis from Michigan State University. She is currently attending the Mott Community College Law Enforcement Regional Training Academy and expects to graduate in April. She will be sworn in then.

Chief Sippert said that Officer McCallum will be the fourth sworn female officer on the force.

Trustee Frank Kasle asked if any of the new hires are African-American. Chief Sippert said no. None of the applicants for the recent testing period were African-American but it is an ongoing effort to recruit some.

“We are sensitive to that,” Chief Sippert said. “All police in Genesee County, the state and the nation have the same difficulties in staffing the department in a manner that reflects the community they serve.”

It is an overall challenge to find interested and qualified candidates, he said. Over the past 20 months, the township Civil Service Commission has conducted four entry level testing processes and created an updated list of eligible candidates but another round of testing will be opened in May and June after the graduation of the next class from police academies.

Chief Sippert said the department’s recruiting efforts are widespread including job fairs and publication of job ads in trade magazines.

The established Civil Service eligibility list is good for two years but Chief Sippert said they prefer to draw from the top candidates on the list because experience has shown that those with lower scores tend not to pass field training.

Since 2007, the township has hired 41 officers, he said. Of those, 13 did not stay. With turnover and retirements, the department has undergone almost a complete turnover of staff in the last decade, he said.

Funding to increase the police force was provided by a Public Safety Millage approved by voters in November 2014.