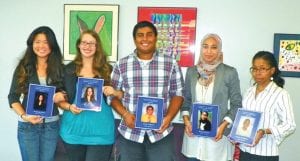 Five members of the Class of 2012 were inducted into the CA Academic Hall of Fame. They are (left to right) Yeonjung Park, Rachel Ellis, Kiran Vekaria and Mishaal Khan. Andrea McAllister, far right, accepted on behalf of her son Jarron McAllister who has already started college.

FLINT TWP. — In their final achievement as Carman-High School scholars, five 2012 graduates were inducted into the Academic Hall of Fame in a special recognition at the school board meeting Tuesday night.

The annual honor is bestowed on a select few graduating students based on a formula calculated from weighted ACT test scores, grade point averages, advance placement courses and test scores.

Superintendent Steve Tunnicliff explained that the idea for the AHOF was resurrected about nine years ago when he was principal at the high school. After a major remodeling, they found a small plaque bearing the names of past hall of fame winners that had not been updated in about decade.

After several years of planning with high school administrators Rory Mattar, now principal and Deborah Davis, assistant principal, the AHOF was renewed to give a permanent place of honor in the high school showcasing academic achievers similar to what is done for athletic achievers.

“Only a very few number of students each year can meet the rigorous standards that we set forth,” Tunnicliff said of the mathematic formula used to select AHOF inductees.

Park and Khan finished first and second in their class and Vekaria and McAllister finished fourth and sixth, respectively.

Mattar explained that not all students with high grade point averages meet the rigorous criteria to be eligible for the hall of fame.

“We really want it to be the absolute cream of the crop.”

Seven inductees were chosen last year but previously there have been as few as two, said Davis, who often is the person who has to deliver the disappointing news to top ranking students who do not qualify for the hall of fame.

Park and Khan both said they will be attending the University of Michigan in Ann Arbor. Park, who has a fullride scholarship, will be in pre-med majoring in biochemistry.

Khan will also be pre-med.

Vekaria is seven weeks into his college career at Kettering University where he earned a four-year full ride scholarship last year after finishing first last summer in a pre-college program he attended there. He is studying applied physics.

McAllister has already left town for Princeton University on a full-ride scholarship, where he is majoring in molecular biology. His plaque was accepted by his mother Andrea McAllister.

Ellis said she is headed for Kalamazoo College where she plans to major in psychology and hopes to study abroad.

The AHOF plaques presented to the students have their names and photos on them and will be permanently displayed with past honorees in an AHOF showcase at CAHS.