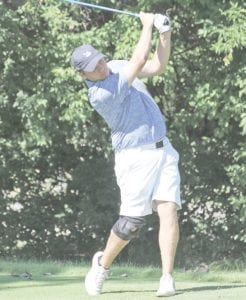 Flushing’s Joe Montpas has the top seed in the FJGA season-ending tournament.

On Monday, the group held its tournament qualifying round and Flushing’s Joe Montpas led all participants with a 1-under par 71. Goodrich’s Sydni Harding led the girls with a 79.

In the semis of the Championship Flight for boys, Montpas defeated Mitchell Hughes 4 & 2 and Noah Troyer beat Kyle VanBoemel by default. In the first flight, Dylan Mullaney beat Parker Mitchell 4 & 3 and Dylan Conte beat Dylan Stankewicz by default. In the second flight, Evan Finsterwald took out Trevor Sundrla by default and Cameron Beckwith beat John George 1 up in 22 holes.

Yesterday as we were going to press the finals were taking place with play beginning at 7 a.m. See next week’s edition to see who claimed the titles. – L.P.