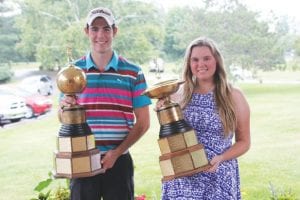 Jack Weller and Kristen Wolfe were the 18-hole championship flight winners for 2014.

Wolfe was 1-under-par and had just one bogey in the 12 holes she played against Lucia. She became the 19th girl in the 75-year history of the FJGA and third in a row to win more than one title in the 18-hole group’s championship flight.

“It’s just a great honor,” said Wolfe, who played in the FJGA for 10 years. “To win it once, you get to be on a list of great golfers. To win it twice shows you can do it more than once.”

Zyber was looking to become only the eighth boys’ multiple champion and the first since 1992. But Weller shot 2-under-par for the 16 holes and led most of the way. He was 2-up at the turn and stretched it to 3-up early on the back nine before Zyber birdied No. 13 to get it back to 2-up. Weller clinched it with a par on No. 16.

The two have known each other since kindergarten and often stayed after practice in their high school years at Swartz Creek to play informal match play rounds.

“That kind of made today easy, not a lot of nerves,” said Weller, who also won the inaugural Steve Braun Cup points race this year. “We just thought it was a fun round to play each other. And it’s always better to beat your best friend than somebody you don’t really know.”

Tyler Furze, a Bentley graduate now playing for Spring Arbor University, won the boys’ first flight championship with a 2-and-1 victory over Swartz Creek’s Garrett Jewell. Furze, who took up golf seriously when a rare bone disease ended his hockey career, also was the sixth-flight champion two years ago and earned the Most Improved award last year.

“This is a pretty big deal to me personally after having to quit hockey and having an organization like this to come to,” he said. “It’s important because I know all my hard work has paid off for something.

“Hopefully, I’m going to come back next year and work for the organization and help the kids out. I’ve got to give back to my community.”

Lapeer’s Dylan Mullaney won the boys’ second flight with a 4-and-2 win over Nick Campbell, and Brandon Walker beat Brian Tallieu II 3-and-2 for the third flight crown in a battle of Davison golfers.

For results of all other flights and divisions, visit www.fjga.org.