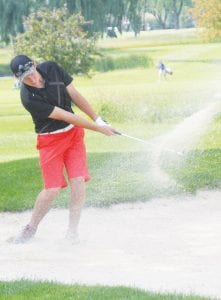 In 90-degree weather that saw seven players drop out at the Captain’s Club of Woodfield, Flushing junior Kerri Parks pulled away from senior teammate Brooke Thomas to take the girls’ title, and Holly graduate Mitch Hughes held off a strong challenge by Grand Blanc grad Alex Finterwald to clinch the boys’ crown. The Braun Cup, named for a longtime FJGA director, was inaugurated last year to honor consistent play over the six-week season.

Parks was runner-up to Davison grad Andrea Richards in last year’s race but led wire-to-wire this year. She earned a whopping 270 points out of a possible 330 by finishing first in five of the six weeks, including Monday, when her 79 tied Goodrich junior Sydni Harding for the top score.

“This is pretty big,” said Parks. “It’s nice to know that my hard work has paid off throughout the season.” 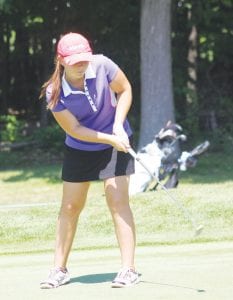 Girls’ champion Kerri Parks wills her putt toward the cup on the No. 8 hole in Monday’s play at the Captain’s Club.

Parks was 20 points ahead of Thomas going into Monday’s round, and no other golfer had a mathematical chance to catch them. Parks started slowly, going 4-overpar in the first three holes, but finished strong with two birdies in the last three holes. Thomas shot 88 and finished second in the points race with 200.

Grand Blanc’s Cammi Lucia was third Monday with an 80 and jumped up to third place in the final Braun Cup standings with 165 points. Goodrich senior Taylor Harding shot 81 and finished fourth with 150 points, while sister Sydni wound up fifth with 140 points after her 79.

Hughes led Flushing senior Joe Montpas by just five points going into Monday’s play but got an easier path to the title when Montpas skipped the final week to play in a Golf Association of Michigan event.

Hughes still had to contend with Finsterwald, who shot a sizzling 73 for the day’s best score and zoomed up to second place with 195 points. Hughes had to finish at least fifth to clinch the Cup and easily met the challenge, taking second with a 74 that left him with 230 points. Montpas wound up third with 185.