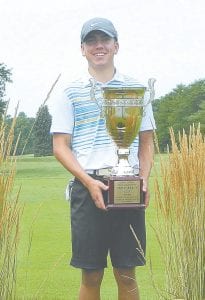 DAVISON – The final week of the Flint Junior Golf Association’s summer league took place Monday at Davison Country Club, as golfers in the Jack Nicklaus group looked to fine-tune their game ahead of the big end-of-the-season tournament next week.

Goodrich’s Trent Barth and Lapeer’s Brooke Gibbons earned medalist honors on the day with rounds of 73 and 80, respectively. In addition, Grand Blanc’s Nick Bruett and Davison’s Kamryn Johnston were named Braun Cup champions following their low rounds, having earned the most points in their respective divisions throughout the season.

Other boys’ division scores from Monday included Bruett with a 76, Grand Blanc’s Ranveer Ajimal and Swartz Creek’s Cameron Beckwith with a pair of 79s and Grand Blanc’s Grant Foren with an 81. Travis Gist of Davison and Brendan Silpoch of Grand Blanc each finished with 82s, Lapeer’s Jake McGeary carded an 83 and Sean Spidle and Zach Limas both finished with 85s. 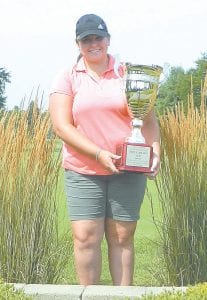 Davison’s Kamryn Johnston finished as the FJGA’s Braun Cup champion following the season, hauling in the award Monday at the Davison Country Club.

Next Monday, the Nicklaus group heads to Swartz Creek Golf Course to begin the first of a three-day stroke play tournament to close out the FJGA season. The four low scores in each flight will return Tuesday for semifinals and the winners will play Wednesday for the finals. For full tournament results and to see the upcoming schedule, visit www.fjga.org.