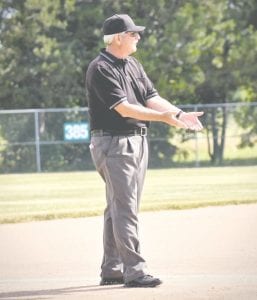 North Branch’s Jack Miles makes the call at third base during the final game of the Connie Mack National Qualifier at Tom Cole Field last Saturday. Photo by Terry Lyons

FLINT—The Flint All-Stars were eliminated in the Connie Mack National Qualifying Tournament on Friday afternoon, losing to the Saginaw Means 6-3.

The loss knocked the Flint All- Stars from contention to advance to the Connie Mack World Series in Farmington, NM. Flint finished the qualifying tournament with a 1-2 record.

In Wednesday’s opener, Flint lost to the Florida Legends 7-4 after blowing a 4-1 lead after five innings. The All-Stars were led by Fenton’s Brock Henson and Brendan Murphy of Flushing. Henson went 2-for-3 and scored a run and drove in a run. Murphy drove in two runs.

Flint won its only game of the qualifier on Thursday, beating Grossi Select 5-1. Drew Trevino, a rising sophomore at Flushing, was dominant on the mound, tossing a complete game three-hitter. Fenton’s Logan Welch led the offense, going 3-for-3 with three RBI. Murphy also made a highlight worthy diving catch in center field.

The other teams in the field included the South Troy Dodgers of New York, the Ontario Blue Jays, College Connect of Detroit, the Puerto Rico Potros and the Michigan Bulls.

The Flint All-Stars were comprised of some of the top high school talent from the Greater Genesee area. The roster included four players from Linden in Colby Kohmescher, Carson Mabe, Jeff Metzger and Johnny Miller. Grand Blanc was also well-represented with Mason Bryant, Brady Gorman, Bradyn Hoskins and Drew Kranz.

Swartz Creek also boasted a pair of players, as Carsen Allesie and Brendon Bouchard were both selected for the squad. Carman-Ainsworth, Montrose and Fenton were the other three schools with more than one player on the team. Garrett Gleason and Harrison Hogan are both from Carman-Ainswoth, while Brock Henson and Logan Welch represented Fenton. Wendell Bruton and Cameron Tupper both played for Montrose this past spring.

The rest of the roster was comprised of Collin Harris from LakeVille, Colby Phipps from Goodrich, Brendan Murphy from Flushing, Hunter Patrick from Birch Run and Cameron MacNeill from Lake Fenton.