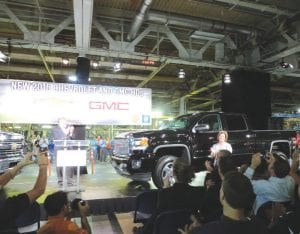 Last Thursday, GM and UAW officials continued that history-making legacy by unveiling the 2015 Chevrolet Silverado heavy-duty and GMC Sierra heavy-duty pickups, according to a press release.

With production scheduled to begin in early 2014, the unveiling capped a $328-million investment project in the plant and also marked a dramatic comeback for GM in the Flint area.

“In the last four years, we have invested more than $1 billion in our manufacturing plants here, making Flint Engine a producer of engines for some of our most popular small cars and crossover vehicles, turning Flint Metal into our center of expertise in aluminum stamping and making Flint Assembly the epicenter to reclaim the heavy-duty pickup title,” said Larry Zahner, GM North America manufacturing manager.

GM currently employs 7,500 employees at its manufacturing and Customer Care & Aftersales facilities in Genesee County, an increase of about 1,000 employees from just two years ago.

“GM has always been a major contributor to the Flint and Genesee County economy,” said Tim Herman, CEO of the Flint & Genesee Chamber of Commerce. “While the numbers have changed over the years, the economic impact on our region remains significant.”

That is good news to Amy Farmer, who manages both the assembly and stamping plants in Flint.

“GM’s commitment to Flint is not based on nostalgia; it’s based on the fact Flint is an excellent place to do business,” Farmer said. “We have forged many productive partnerships with our elected officials, local schools and colleges and the UAW and its members, allowing us to invest in and grow our business here.”

These partnerships during the past two years allowed GM to invest in significant upgrades to the plant’s paint, trim and body shops, along with installation of testing equipment and new tools on the assembly line. Many of the upgrades were targeted at improving the quality of a truck that has been at or near the top of its class for many years.

Just this summer, the Silverado HD and Sierra HD took the top two spots in the J.D. Power & Associates Initial Quality Study. The current truck also claimed the 2011 Motor Trend Truck of the Year, one of many accolades the vehicle has received over the years.

Designing a truck is one thing; building it is another, as each truck averages about 3,800 parts.

Two years ago, a launch team of 25 hourly and salaried employees was formed to develop the foundation for prepping the plant and training the workers to build the new truck. They worked with GM’s engineers and suppliers, trekking to GM’s technical center in Warren to work on early versions of the new truck.

Eventually, the launch team grew to 100 employees as the plant edged closer to producing pre-production vehicles that were used to validate the production process. Team members who assemble the vehicles were given advance training and then participated in the early build process, validating the methods of installing new parts, utilizing new tools and processes.

At the same time, approximately 600 employees received more than 9,000 hours of training in robotics, controls, electrical and mechanical systems, skills necessary to run new and improved equipment in the plant.

“The success of any vehicle launch rests with the people who actually build the truck,” said Barry Campbell, UAW Local 598 chairman. “It’s the production and skilled workforce that has made us successful in one of GM’s oldest facilities and ensuring they have the right training, tools and support means they will continue a tradition of building the best full-size pickups on the road.” — R.S.