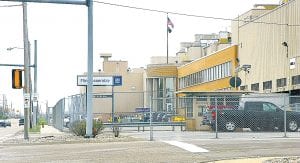 Flint Assembly Plant has hired new hourly workers for the first time in about nine years.

FLINT TWP. — After nearly eight months as a temporary worker at the Flint Assembly Plant, Dar Destrampe of Saginaw was among the GM employees who got the good news last week they they were being bumped up to permanent fulltime status.

“I didn’t know it would happen so soon,’’ Destrampe said. “There are so many who have been working here for years and years as temps.’’

In a hopeful sign of economic recovery, GM officials announced the hiring of 235 temporary workers for full-time employment and the addition of 82 workers to the temporary staff pool.

It is the first time since 2003 that GM permanently hired hourly workers, said Barry Campbell, chairman of UAW Local 598.

Many of the newly hired fulltimer workers have been temporary employees for five or six years, mainly called back when needed to fill in for summer help and when work ramps up.

“It is exciting for them that they are able to gain full-time employment and get health care for their families,’’ Campbell said. 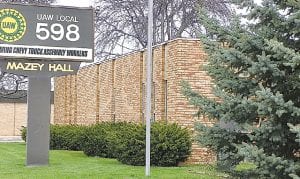 UAW Local 598 gets a membership boost with the hiring of 235 new workers at the Flint Assembly Plant.

But it was noted that workers were drawn from an established referral pool dating back many years, as were the newly hired temporary workers. GM is not accepting new applications for workers.

Still with GM on the road back from filing bankruptcy, Flint is fortunate to be hiring again, Campbell said, attributing the openings to attrition and retirements in a special program GM negotiated with the UAW.

Destrampe is happy to count himself among “the fortunate ones.” He has worked steadily installing carpets and headliners since he was hired August 15 at the Van Slyke Road plant.

He got his referral application from friends three years ago and was surprised when he was called to work in August.

Had GM not worked out, Destrampe’s back-up plan was to return to school and find work bartending.

Working in the shop is a big career change for him. He previously worked with special needs children in Montrose School District before getting pink slipped,

“it is a burden off my chest,’’ Destrampe said of landing full-time work. But it won’t change his lifestyle much.

Recently divorced, Destrampe said his main concern is now being able to provide for his 22-month -old daughter. Otherwise he plans to continue cutting back on spending. With gas prices going up, even a steady paycheck will only go so far, he said.

Destrampe said it felt good to be part of some good GM news.

“It is good for the community that things are going in the right direction,’’ he said.

The new hires are classified as Tier 2 and earn about $16 an hour compared to Tier 1 workers who earn about $28, said Tom Wickham, GM Plant Communications Manager for the Flint area.

GM completed the hiring process for 115 employees last week and planned to process the remaining 120 employees this week, according to the hiring announcement sent out last week to employees, signed by Campbell and Amy Farmer, Flint Assembly Plant manager.

“Hiring new employees would not have been possible without the hard work of the UAW-GM team acknowledging the need to fill openings created by employees who transferred back to other GM facilities or retired,’’ the announcement stated.

The new hires will push UAW membership to more than 2,500, Campbell said.

“It’s always exciting for us to grow our membership and to create jobs with benefits for families,’’ he said.