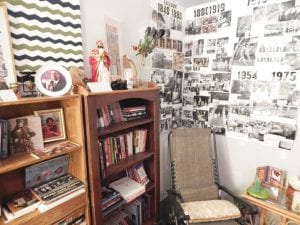 Ingress Yumen’s room dedicated to historical movements – the art from Kathryn Blake charts the rise of the civil rights and Black Power movements through a century.

FLINT – Ingress Yumen, a new business open on Flushing Rd., is advertised as a bookstore – but visitors have a lot more waiting for them inside.

Owners and partners Derrick Gillard and Audra Parmer are on to something unique in the Flint area: instead of focusing on one particular business idea, such as books, Ingress Yumen (which means “mysterious and beautiful path”) is run as an emporium and “humanitarian café”. Guests can come in and explore a variety of rooms, activities and areas of interest in between cups of coffee and browsing the book section located at the back of the store.

What’s more, the store’s hours are from 6:30-11 p.m. to catch the night owls and after-work crowd. Those suffering from insomnia, depression, or simply want an alternative to the bar, as noted by Gillard, can enter into the shop and relax for a few hours.

A small dose of the curiosities located in the shop include, but are not limited to: a shoeshine station; a corner stashed with vinyl records and a player, as a posters of “Lizard King” Jim Morrison, Gillard’s favorite musician, on the wall; an entire room dedicated to various social movements, comprised of an art exhibit showing the Black Power Movement from artist Kathryn Blake, sections dedicated to women’s suffrage and Native American History, brochures on religions and movements, and a bookcase full of empowering and historical literature; and a PlayStation and television for video games and movies (there are shelves of DVDs in the bathroom). 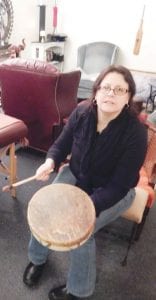 Audra Parmer, co-owner of Ingress Yumen, practices on her deerskin drum. The drum was crafted by a local shaman.

The business opened in August, after Gillard stopped while on a drive through the neighborhood to check out the building and made a decision guided by fate. His mother had passed away in June from Alzheimer’s and Parkinson’s and, rather than leave the city, he felt it was his duty to stay there and carry on her legacy by doing something he’d always dreamed of: opening a bookstore.

Gillard, after some restoration and work, plans on notifying the school system and local museums of the art exhibit and learning materials. It’s all part of his plan to connect with the people around him.

“I want to provide space for the community to come in,” said Gillard.

In Ingress Yumen, every item is for sale, including the furniture – part of the couple’s “no-attachment” philosophy. Service such as life-coaching and “Reiki” – a holistic practice involving energy channeling into another person in order to “restore physical and emotional well-being” –are offered up by the two co-owners.

“We believe everything is inside of you,” said Gillard. “Even the most successful people still find excitement in life.”

As for the future, Gillard and Parmer hope the word begins to spread to the community, and they plan to offer even more once business starts to pick up, such as mental health services (Gillard has a background in psychology and Parmer is a trained nurse for community mental health) and monthly drum circles.