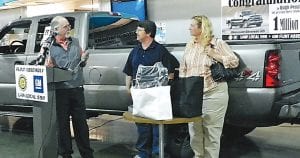 Hugh and Tammy Pennington with their Chevy Silverado driven more than one million miles at a celebration Friday at the Flint Assembly Plant where the truck was built six years ago.

FLINT TWP. — In a feat that few vehicle owners will ever come close to experiencing, Hugh and Tammy Pennington of Delton were driving along the Chicago tollway on April 4 when the odometer on their 2006 Chevrolet Silverado truck flipped over to one million miles.

Error lights started flashing on the dashboard soon after that and fearing a shut down, Tammy pulled into a dealership to have the odometer reset.

The odometer was back up to15,000 miles by the time the hard-driving Penningtons arrived last Friday at the General Motors’ Flint Assembly plant on Van Slyke Road for a special recognition in their honor from the folks who built their diehard truck.

Their achievement has been verified and documented, said Tom Wickham, Manager, GM Communications.

“When I look back at the history of our Chevrolet and GMC products at this plant, I don’t think anyone is surprised at the reliability and durability of our trucks,” said Amy Farmer, plant manager of Flint Assembly. “With two Motor Trend Truck of the Year awards in 2001 and 2011 I’m proud to say Flint Assembly employees build the best full-size pickups on the road.”

For sure, any driver would be thrilled to get 200,000 miles out of a vehicle. But one million miles?

To put it into perspective, that’s the equivalent of 40 trips around the Earth or a little more than two round trips to the moon, according to a GM press release.

That averages out to about 474 miles per day over six years, according to Tammy’s calculations but she said they usually travel 600 to 700 miles on traveling days.

The Penningtons spend a lot of time on the road, driving coast to coast and as far north as the outskirts of Alaska and Newfoundland, hauling trailers.

After buying the truck in Fitzgerald, Georgia in November 2006, they started out using it to haul manufactured trailers for the Federal Emergency Management Agency for victims of Hurricane Katrina who needed temporary housing.

After that, they signed on as contract drivers for Indiana Transport hauling RV travel trailers from the factory to dealerships throughout North America.

Tammy 50 and Hugh, 53, incorporate sightseeing side trips into their travels. Hugh is a retired member of UAW Local 602 in Lansing. Tammy, a former computer programmer for a grocery store chain, does 90 percent of the driving.

Despite all that heavy hauling, their fourwheel drive Chevrolet Silverado 3500 HD pick-up has required very little major maintenance. It has a Duramax diesel engine and Allison transmission and was built at Flint Assembly in Jan. 2006. The Penningtons changed the oil every 3,000 miles and bought new tires twice a year, Hugh said of upkeep.

“It has never left me on the side of the road,” Tammy added, generating appreciative applause from plant workers gathered around to hear their story at the recognition ceremony.

It’s not the first Silverado to give the Penningtons their money’s worth. They also have a 2001 with 725,000 miles that is on its second engine and needs some work, said Hugh, adding that he’s always been a Chevy fan.

Though rare, this is not the first time a Silverado has surpassed the million-mile mark.

Contrary to popular myth, GM does not give a new vehicle to million-mile achievers, Wickham said. At one time, it kept track of vehicles achieving 200,000 or more miles, but few records are available for other highmileage vehicles.