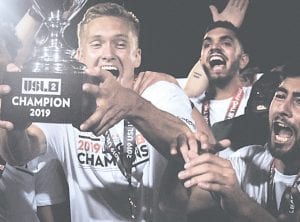 Members of the Flint City Bucks celebrate on the field after securing the USL2 championship at Atwood Stadium on Saturday. Photo provided via Twitter

FLINT — The Flint City Bucks USL 2 soccer team capped off its first season in a new city with a USL League Two championship on Saturday night, defeating Reading United FC 1-0 in the title match in front of 7,198 fans at Atwood Stadium.

Ayuk Tambe (Blaine, MN/ Tusculum) scored the game’s only goal off a penalty kick in the 110th minute. With the score deadlocked at 0-0, the match looked to be heading for a shootout, but during the second extra-time session, Reading’s Lamine Conte tackled Tambe from behind on goal. After a meeting of the referees, it was determined that Tambe was brought down inside the penalty box. The refs issued a red card to Contra and a free kick for the Bucks. Tambe, who was also named MVP of the tournament, buried the ball into the upper right half of the net and secured the Bucks’ fourth championship in team history.

Flint City controlled the first 45 minutes of the match, led by David Achaerandio (Spain/Charleston) and Brayden McNitt (Brighton/Wright State). Archaerandio repeatedly won 50-50 balls and dictate the flow of the match, while McNitt nearly broke the stalemate with six minutes remaining in the first half. McNitt’s shot on goal was stopped by a diving save from Reading goalie Simon Lefebvre. Charlie Booth (Concord, MA/ Rhode Island) also had a shot on net from 18 yards midway through the opening half, but Lefebvre thwarted it with a fingertip save.

Reading still found scoring opportunities in the second half. The Bucks dodged bullets late, as Gilbert Waso’s shot hit the side of the net in the 97th minute. Reading also had an opportune free kick in the first overtime, but Conte’s shot was met with a five-man wall of Bucks defenders.

Although the Bucks have won three other titles throughout team history, Saturday’s win marks the club’s first championship in the city of Flint and in the USL League Two, which was known as the Premier Development League until 2016. Branded as the Michigan Bucks, the club took home PDL championships in 2006, 2014 and 2016.

Saturday’s championship also marked the final match for Flint City’s head coach Demir Muftari, who retires with four Bucks’ titles under his belt. He will be replaced by assistant Andy Wagstaff starting next season.