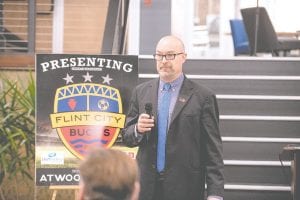 FLINT — The Flint City Bucks of the USL League Two will take to the field at legendary Atwood Stadium for the 2019 season sporting a revamped name, team colors and crest that was unveiled in a press conference at the Ferris Wheel last Wednesday.

All aspects of the former Michigan Bucks soccer team branding – the result of a popular online contest – have links to the roots of the game and the proud history of the city it now calls home, including the citizens and fans who ultimately decided on its name.

More than 1,000 online entries were received in the franchise’s “Name the Team” contest. A list of the team’s top choices was then presented to Mindy Prusa, Director of Flint’s Whaley Children’s Center. Working with about 40 of the residents at the Center, Prusa worked with the excited children to decide on the winning entry. That winning combination came from the collaboration of the Whaley Children along with Flint resident and local freelance photographer, Kayce McClure, who tagged the new moniker.

“Our children were so honored and thrilled to be a part of this historic decision for Flint!” Prusa said. “They took this very seriously and came to a group decision that we think reflects the proud history of both Flint and our new soccer team.”

The response to the contest showed the support the team has from the Flint community.

“We were overwhelmed with the amount of fans who participated in our contest,” said team Chairman Dan Duggan. “We had many entries that could have worked well for our team and the city. Kayce and the children at the Whaley Center had a tough job in deciding on a winner, but they came through with a great choice.”

The new name – Flint City Bucks – pulls from European convention using the name of the town followed by the word City. Considering the impact Flint has had on Michigan and U.S. history, it is prominent in the team’s name. The colors of the team – blue, red and gold – also pay homage to three distinct contributors to the team and its city.

Blue signifies the decades-long dominance of “blue collar” workers who are the backbone of Flint, its work ethic and economy. Blue also signifies the renaissance of the 142-mile Flint River, which was recently named one of the first State of Michigan Water Trails. The renovation and rebirth of Flint River’s pathway through the city – adding safe recreational activities and events – illustrates the exciting and changing vitality of Flint.

Gold nods to Kettering University, which took ownership and renovated historic Atwood Stadium where the Flint City Bucks will play all of their home matches.

The team’s new logo intertwines all of these aspects, including the arrowhead that has long symbolized other prominent Flint businesses, athletic teams, service organizations and even the Flint Police Department. The arrowhead can be documented as far back as the 1800s when the Chippewa Indians resided in the area. Woodward Movement Creative, a design, printing and branding agency, teamed up with local freelance designer, Jesse Augustine of Grand Blanc, MI to create the new revamped logo.

“It was important for us to immerse our team into the history of Flint,” said team President Costa Papista. “Retaining a part of the club’s former name was also important, to preserve the connection to a team that has been the most successful franchise in the history of the USL Two – formerly the Premier Development League. We are very grateful for Kayce’s choice, the Whaley Children and all of those who took an active role in helping us rebrand our team to fit in with the history of Flint and the sport of soccer. We would like to give a special shout out to Mindy Prusa for all of her help and the amazing work she does at Whaley’s.”

Contest co-winner, Kayce McClure will receive four VIP inaugural season tickets, two VIP parking passes and a team autographed jersey. The Whaley’s Children will have an open invitation to any game, anytime compliments of the team and its generous community sponsors.