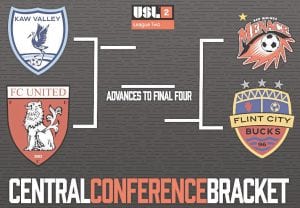 FLINT – The Flint City Bucks clinched a USL League Two soccer playoff berth for the 21st time in the team’s 24-year history on Saturday, defeating the Dayton Dutch Lions 1-0 in the final match of the regular season.

Both teams went scoreless in the first half, but Bucks came out firing, as Farkus had a shot on goal in the match’s opening minute. Flint and Dayton traded scoring chances for the rest of the first half.

Trailing 1-0 in the final 10 minutes of play, the Dutch Lions pressured the Flint defense for the equalizer, but Bucks goalkeeper Gustavo Vasconcelos (Brazil/ Marshall) preserved the shutout with three beautiful saves.

On the same day on the other side of the league, the West Virginia Alliance ended their season in a 2-2 draw against Cincinnati, granting the Bucks a playoff berth with their win over Dayton.

“We have had some challenging seasons over the past decade, but this was by far the most challenging,” said Bucks coach Demir Muftari, who is the only coach is USL history to win two North American championships in 2014 and 2016. “Our compressed schedule has taken a toll on the player rotation during the course of the season. We have had an unusual amount of injuries that caused players to miss much of the season, but we relied on our depth and our youth to get the job done. It used to be you needed everything to fall into place to win a national championship. The competition level in our league and particularly our division has made it equally as hard now just to qualify for the playoffs. I am very happy with how things turned out, but now the real work begins. We must find a way to win four more games in the playoffs to further cement the club’s name in soccer history. There is no better time to do that and no better fans than what we have experienced at Kettering’s Atwood Stadium this season.”

The Bucks will advance to the Central Conference semifinals against Heartland Division champion Des Moines Menance tomorrow at 8:30 p.m.