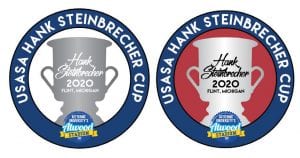 FLINT — The United States Adult Soccer Association (USASA) has selected the Flint City Bucks as host for the 2020 Hank Steinbrecher (National) Cup at Kettering University’s historic Atwood Stadium, May 29-31. This is the first time the national tournament will be held in Michigan.

Competitors in the tournament always include the previous year’s Steinbrecher Cup winner and the U.S. Amateur Cup champion, along with top delegates from USL League Two and the National Premier Soccer League (NPSL). The Bucks, winners of the Steinbrecher Cup for the past three years, will join U.S. Soccer’s 2019 National Amateur Cup champion Newtown Pride FC (Sandy Hook, Conn.) along with Reading United AC (Reading, PA) of USL2 and Cleveland SC of NPSL. Reading United AC have been USL2 National Runners Up in 2018 and 2019. On August 3, 2019, the Flint City Bucks defeated Reading 1-0 at Atwood Stadium to win the National Championship in front of 7,198 fans. The 2020 Steinbrecher Cup could feature a thrilling rematch should both teams advance to the title game.

“We take great pride in winning three-consecutive Steinbrecher Cup national championships as the best team each year from across the ranks of amateur soccer from coast to coast,” said Bucks Chairman Dan Duggan. “I know our fans in Flint will embrace this opportunity to welcome three top clubs to our city to compete for this prestigious honor – and to be presented as the winner by soccer legend Hank Steinbrecher himself.”

Last season, in Milwaukee, the Bucks were crowned the nation’s top amateur team among all of the top U.S. Soccer amateur leagues. The tournament features three total matches – two semifinals on Friday, May 29 (at 5 p.m. and 7:30 p.m.) – with the winners playing on Sunday, May 31 at 1 p.m. The Bucks are expected to play in the 7:30 p.m. semifinal match on Friday.

Tickets for the 2020 Hank Steinbrecher Cup are on sale now at www.ticketmaster.com and at Flint Prints in the lobby of the Ferris Wheel Building in downtown Flint (615 S. Saginaw Street, Flint, MI 48502). One ticket is valid for both games on Friday, May 29th. The championship match requires its own ticket on Sunday, May 31st.

“To be the host site for the 2020 Steinbrecher Cup is a tremendous opportunity for Flint and Genesee County,” said Tim Herman, CEO of the Flint & Genesee Chamber of Commerce. “This prestigious tournament will mean significant business for the local hospitality industry, including our hoteliers, restaurants and event support staff. It will also allow us to showcase Flint & Genesee to players, team and US Soccer officials, and fans from out of state. The community has really embraced the Flint City Bucks, and the Flint City Bucks have embraced Flint & Genesee. We’re looking forward to another terrific season and an outstanding tournament.”

The 2020 Steinbrecher Cup edition marks the Bucks’ fifth tournament appearance. Information regarding tickets and special family passes for the weekend tournament will be posted on the Bucks website the coming weeks.

“The Flint City Bucks’ inaugural season was spectacular,” said Sheldon Neeley, mayor of Flint. “I cannot wait to see what they do this year. We are delighted that Flint will have the opportunity to host the best amateur soccer players from around the country in the Hank Steinbrecher Cup, an all-champions tournament.”