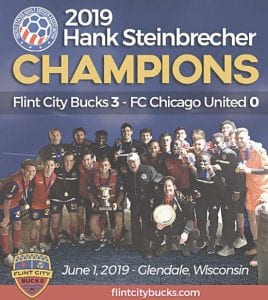 The Bucks dominated Chicago from the opening whistle and scored all three goals in the first half of the championship match.

The win marks the franchises’ 11th national title. The Steinbrecher Cup pits the four champions of the different amateur leagues across America each year, including USL League Two and the NPSL.

The Bucks struck early when Man of the Match, Isaiah Parente (Medina, OH / Wake Forest) set up mid field partner Giuseppe Barone (Grandville, MI / Michigan State) at the top of the 18-yard box. Barone let the ball run across his body past the closest defender and ripped a right footed shot into the top corner of the goal in the game’s tenth minute.

Cincinnati and Flint City battled to a 1-1 draw in the league opener two weeks ago and the fierce battles from the first game carried over to this match as well.

Last week the Bucks notched their historic 300th win over Cincinnati with a come-from-behind 3-2 win.

Following an 80th minute Cincinnati foul from 20 yards in front of goal, Parente stepped up and coolly slotted his right footed shot past the wall and into the side netting for what turned out to be the game winning goal, 3-2.