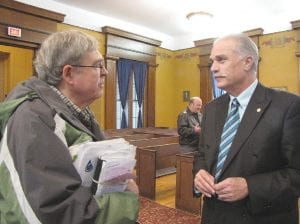 “ We’ll just go with the flow,” said Wright. “ We know the project will benefit the people, lower their costs and create jobs.”

Delays in the proposed estimated $605 million pipeline have been attributed to the financial crisis in the City of Flint, which is one of the key players in the plan to create a water pipeline separate from Detroit Water.

With Flint in receivership, the state recently appointed Mike Brown to be the city’s emergency financial manager. In that capacity, the decision on whether or not Flint will join in the project will ultimately rest with Brown — who is expected to make his financial recommendations to the state Jan. 15.

“Nothing will happen until then,” said Wright. “Once we get the feedback from the State of Michigan, we can move forward from there.”

Support for the pipeline has grown in the two years since its inception was announced.

That support ranges from unions like the UAW and AFSCME, to the Michigan Trades Council and even the Michigan Department of Agriculture, which Wright said see the pipeline as crucial to the agricultural industry along the I-69 corridor.

On Dec. 12, approximately 100 Genesee County workers and residents gathered at the Flint Municipal Center to urge local officials to support the pipeline. The rally was organized by a group calling itself We Are The People, a coalition of students, workers, seniors, families and organizations advocating for Michigan’s middle-class.

The group contends the pipeline has the potential to create up to 1,000 construction jobs over the next three years, cut water rates for area residents, and boost long-term regional agribusiness investments.

“To get our economy moving again, now is the time to invest in our public infrastructure to create jobs, help our businesses compete, and fuel long-term economic growth,” said Patrick Gleason, Genesee County commissioner, in a statement released by We Are The People. “The Karegnondi pipeline will create good-paying jobs now that can’t be outsourced, and help us compete for the high-tech jobs of the future. It’s time to get to work to make this project a reality.”

Wright said the drain commission and the pipeline authority had nothing to do with the rally, but he said it shows the support it has gained in recent months.

“It was more of a rally for jobs rather than a pipeline rally,” said Wright. “The rally shows people are interested in a project that generates jobs.”

The estimated $605 million price tag for the project will be primarily paid for by ratepayers over time — not with tax dollars — and will provide access to an affordable water supply that will drive down long-term water rates for consumers and businesses alike, said officials.

Wright said the support, especially that of the state, is encouraging, but he said the reality is it comes down to one vote — that of Mike Brown.

Brown’s authority as the city’s emergency financial manager allows him to make the decision — regardless of what the city council wants to do.

Another development this past year, Wright said, has been a renewed sense of cooperation with Detroit Sewer and Water.

Detroit, he said, has been in negotiations to sell its Imlay City to Flint pipeline to the Karegnondi Water Authority.

Wright said this will benefit both communities — cash for Detroit and it reduces the cost of the Karegnondi pipeline by $50-60 million. He said both entities have also been discussing a mutual aid agreement to back each other up.