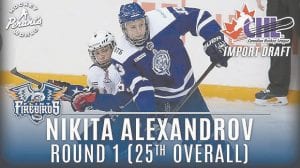 FLINT – The Flint Firebirds continue to improve their squad this offseason, and during the Canadian Hockey League Import Draft, they looked to bolster their blue line. They did just that by selecting Nikita Alexandrov in the first round, 25th overall. The Russian defenseman will fit in well and fill a void left by the departures of Alex Peters and Mathieu Henderson.

“Nikita is a big player and a great skater, that moves the puck well,” said Flint Firebirds General Manager Barclay Branch. “He has a real smart understanding of the game, checking off a lot of boxes that our club has when discussing and evaluating players. Nikita wants to be a Firebird and is excited about the opportunity of playing in Flint.”

Flint also announced the commitment of defenseman Zach Pilon, the Firebirds’ fourth-round, 67th overall pick, after he signed the Ontario Hockey League’s Standard Player Agreement. The Smith Falls, Ont. native registered six goals and 16 assists a year ago with the Athens Aeros of the Central Canada Hockey League. He also added a pair of tallies and three assists in 16 playoff games.

“Signing with the Firebirds means everything to me. It’s the best opportunity I’ve had in my life and I look forward to making the most of it,” said Pilon. “After seeing Flint for the first time at orientation camp in April, everything was top-class, high-end and the people were great. Everyone was so welcoming, the city was awesome and the schools were incredible. This is definitely the best possible situation for me.”

Also, Flint defenseman Fedor Gordeev received a major honor last month, being selected in the fifth round, 141st overall, in the National Hockey League draft by the Toronto Maple Leafs. The selection of Gordeev made him the third Firebird to be drafted by an NHL team in the past two years. Gordeev had four goals and 10 assists in 64 games last year.