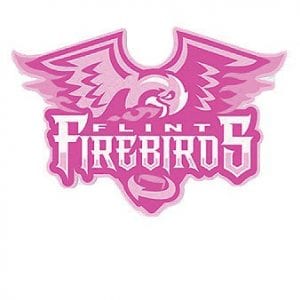 FLINT — In an effort to create awareness about breast cancer and raise funds for breast cancer patients at McLaren Flint, the Flint Firebirds Hockey Club is partnering with the McLaren Foundation for the second annual “Pink Out Night” on Friday, Oct. 14.

The puck drops at 7 p.m. at the newly renovated Dort Federal Credit Union Event Center, and there will be plenty of action both on and off the ice as the Firebirds host the Mississauga Steelheads in another exciting Ontario Hockey League battle.

The Flint Firebirds Players will be wearing special pink jerseys during the game that will be auctioned off at the end of the contest. A 50/50 raffle will take place and special pink merchandise will also be on sale on the concourse. During the first intermission, McLaren Flint physicians will face off against McLaren Flint staff in a broomball game.

“We so appreciate the Flint Firebirds partnering with us again this year to raise funds for this important cause,” said Roxanne Caine, vice president of the McLaren Foundation. “We are looking forward to all of the night’s activities at this family-friendly event.”

The team has kicked off their second season in Flint with an undefeated 4-0 record at home and, just this week, Firebirds Samuel Duchesne and Fedor Gordeev were both listed among NHL Central Scouting’s October ‘Players to Watch’ list for the 2017 NHL Draft. Who will be lucky enough to make the winning bid on these star players’ pink game jerseys?

“The Flint Firebirds are excited to partner with the McLaren Foundation again this year in the fight against breast cancer,” said Costa Papista, Flint Firebirds president. “We all have loved ones who have been or could be affected by this disease. Having the ability to make a difference creates a great amount of pride for our fans, players and organization.”

Great seats are still available and can be purchased at the Dort Federal Event Center Box Office, the McLaren Foundation Office located at McLaren Flint or through ticketmaster.com. Fans are encouraged to use the promo code PINK when making their purchases through Ticketmaster to be sure $4 from each ticket sale will go toward helping in the fight against breast cancer at McLaren Flint.