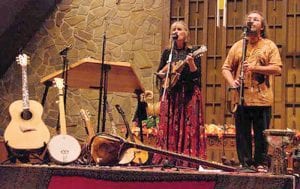 Sponsored by the Flint Folk Music Society, the concert offers family entertainment for all ages.

Touring the United States and Ireland, Four Shillings Short are celebrating their 20th year together. They have made 12 recordings and perform 150 concerts each year. Living as troubadours of old, they travel from town to town performing at music festivals, theatres & performing arts centers, coffeehouses, folk societies, libraries and schools.

Aodh Og O’Tuama grew up in a family of poets, musicians and writers. He received his degree in Music from University College Cork, Ireland and received a Fellowship from Stanford University in California in Medieval and Renaissance performance. He sings both in English and Gaelic and plays Tinwhistles, Medieval & Renaissance woodwinds, Recorders, Doumbek (from Morocco), bowed Psaltery and Spoons.

Christy Martin grew up in a family of musicians and dancers. From the age of 15, she studied North Indian Sitar for 10 years with a student of master Sitarist Ravi Shankar. She began playing the Hammered Dulcimer in her 20’s and has studied with Maggie Sansone, Dan Duggan, Cliff Moses, Robin Petrie, Tony Elman and Glen Morgan. In addition she plays Mandolin, Mandola, Bouzouki, Banjo, Guitar, Bodhran (Irish frame drum), Charango, bowed Psaltery and sings in English, Irish, Spanish and Sanskrit.

General admission concerts tickets are $15 each; $10 each for Folk Society members and $5 for students. A $2 venue surcharge is added to all tickets. For more information, visit online at www.flintfolkmusic.org or call (810) 309-3951.