Flint Fury season ends in first round of playoffs 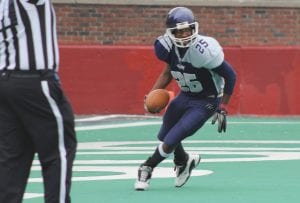 FLINT — It had been a strong summer for the Flint Fury semi-pro football team, ending the year at 6-4 overall and 6-3 in the Great Lakes Football League (GLFL) as it embarked on its first playoff journey since 2004, when it belonged to the Ohio Valley Football League.

Despite turning some heads the past two seasons with winning records after years of struggling to get near the .500 mark, the Fury were unable to get past the first round of the GLFL playoffs, falling to the Lakeshore Cougars, 19- 7, at Atwood Stadium on Saturday.

The game began on a bad note for the Fury as Lakeshore capped off its opening drive with a 16-yard touchdown scamper to grab an early 7-0 lead. Flint, however, would answer right back as Dontrail Arnold connected with Jamaar Keener in the back corner of the endzone to draw even after the opening frame.

That would be the last points scored by the Fury this season, as the Cougars began to take the lead back on a pass downfield that included several broken tackles, eventually leading to the end- zone. The extra point would not find its way though the uprights, leaving the Lakeshore lead at 13-7.

The Cougars’ advantage would remain true until the fourth quarter, as they extended their lead on a one-yard touchdown plunge. The ensuing twopoint conversion would be thrown through the back of the endzone, leading to the eventual final score of 19-7.

Flint struggled to find consistency on the offensive side of the ball despite the impressive play by the defense. Defensive back JC Carradine recorded two key interceptions in the loss while linebacker Tamonta Hill was in on most every play.

Carman-Ainsworth grad and star running back Richard Beaguard had his toughest game of the season, losing two fumbles, including one where his helmet was dislodged from his head. The loss ends Flint’s season at 6-5 overall.