Flint Fury taking care of business on and off the field 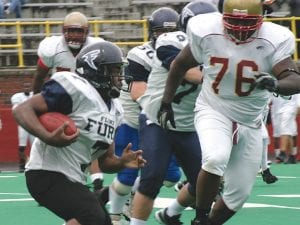 The Fury’s Ravon Nunley carries the ball on June 9 against the Detroit Seminoles.

FLINT— They may get overlooked in the area from time to time, but this season, the Flint Fury semi-pro football team has been turning heads across the state.

The Fury have been playing their home games at Atwood Stadium in downtown Flint since 2003, and have gone through some rough seasons in the Mid- Continental Football League. This year, the Fury decided to make the move to the Great Lakes Football League and have been surprising the semi-pro football world ever since.

“It just really feels relieving because I knew in my heart we belong here,” said Fury owner Charles Lawler, referring to the Fury’s quick start. “We moved to the Great Lakes because of the hard times and the travel cost that was involved with our other league.”

Hard times may have plagued the Fury in the past, but this year has a different feel to it. Flint opened the season with a non-league contest at the Michigan Mercenaries and dominated a typically good football team, 25-8, thanks to a pair of touchdown passes from quarterback Chance Garner, as well as a solid defensive effort. The Fury’s league schedule began on June 9, when they hosted a familiar foe in the Detroit Seminoles.

The Seminoles also jumped ship from the MCFL to the GLFL during the offseason and have been one of the best teams in the country throughout the last decade. Despite the soggy AstroTurf, Flint stunned the semi-pro football community by pulling off a 9-6 win. The Seminoles jumped out to a 6-0 lead in the second quarter on a 59-yard touchdown scamper, but the ensuing two-point conversion would be unsuccessful. The Fury cut the lead in half moments later, as Jeremy Schermerhorn split the uprights from 23 yards out.

Flint got the ball back with just minutes remaining in the first half. It began deep in its own territory and put together an impressive drive that was capped off with a four-yard touchdown pass from Garner to Kadarwin Thompson with 17 seconds left. Schermerhorn’s extra point put the Fury up by three, which turned out to be the final margin.

Cornerback Lonnie Johnson had a pair of interceptions in the second half to help ice the win. In their most recent action, the Fury headed down to the Toledo-area for a match-up with the Northwest Ohio Knights. Garner ran in a 2-yard touchdown and threw scoring strikes to Oliver Turner for 12 yards and Adrien Lawler for 55 yards, giving the Fury their third win in as many games, 21-7. Johnson’s defensive prowess continued with a fumble recovery. The win earned the Fury the No. 7 spot in the American Football News national rankings, and in the American Football News Today rankings, the Fury are No. 5.

The Fury recently held a free youth football camp at Atwood Stadium, and have been cleaning up empty lots throughout the city. For their work, the Genesee County Land Bank awarded the Fury a $3,000 stipend to help cover team expenses and buy new uniforms, as well as provide equipment for the less fortunate players. The team has also been heavily involved in the “Stop the Violence” campaign.

“Stop the Violence is a new area we wanted to be a part in because that’s a major issue in our city,” added Lawler. “Our players see this everyday and we wanted to give them a chance to take a stand and be a part of the community in another positive light. We are hoping it catches on so we can really do a major service in our community. Really, we just want to be noticed as a part of this community in more than just football and give these young men something to take with them beyond the Fury. I was that person with the (now-defunct Flint) Falcons and I believe it is a big part of me now.”

The Fury will also be holding a car wash fundraiser on June 22, where they will be signing autographs and getting to know the community. Those who get their car washed will receive a free ticket to the Fury’s next home game on June 23 against the Capitol City Stealth. Flint’s focus for the time being, however, is on their area rivals, the Flint Rampage. The Rampage are currently 0-3, and play at Fenton’s Ivan Williams Field. The Fury travel to the Rampage on Saturday, and are looking forward to hitting the gridiron with their hometown foes.

“We are looking forward to our game with the Rampage in a big way,” continued Lawler. “ We want to be the only team in this area and they are in our way right now. They are up on us with victories in past meetings, but we are in the same league this year and this game means the most out of our previous meetings.”