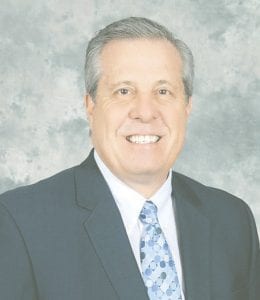 GENESEE COUNTY — Despite the challenge that the Flint water crisis has posed to business and economic growth in the city and surrounding areas, the Flint & Genesee Chamber of Commerce reported continued growth and success in a number of critical areas. During the organization’s 2017 Annual Meeting last Wednesday, the Chamber and a number of their associates pledged their enduring commitment to improving Flint for years to come.

Starting out the Annual Meeting, outgoing board chair of the Flint & Genesee Chamber, Robert Rummell introduced his replacement, Steve Landaal, to the huge crowd gathered at the Holiday Inn Gateway Centre in Flint. Landaal, President of Landaal Packaging, addressed the group, saying that he enthusiastically accepts the opportunity to be the Chamber’s board chair, and he is excited to work towards a better future for Flint and Genesee County.

Tim Herman, the CEO of the Flint & Genesee Chamber, provided a look at the state of the Chamber and business environment. Herman reported the forward progress and momentum that Flint and Genesee have continued to exhibit throughout a perilous year, stating that the economy has continued to diversify, wages have increased, unemployment rates have improved and home values have increased.

“These are clear signs of forward momentum in our region,” said Herman. “Throughout 2016, we stayed focused on the progress we made before the water crisis.”

Herman outlined the Chamber’s plan to help the region emerge from the cloud of the water crisis in their roadmap to success, titled “2020: Building the Future,” a strategic plan that provides a forward thinking, forward-looking approach to advance economic and community growth in the area. The plan is based on four goals: to increase and diversify investment and jobs; to enhance knowledge and skills within the community and grow talent; to enhance the image of Flint and Genesee County; and to achieve enterprise efficiency and effectiveness.

Among the Chamber’s plans for 2017 and the coming years, Herman stated that the organization’s development programs will continue to provide a successful platform for increased investments and the expansion of Flint and Genesee’s tax base. Job creation, capital investment and business attraction comprise the foundation for the map to continued success, and these three points are already well under way.

C3 Ventures, a manufacturing company based in Detroit, will soon invest $9.7 million in Riverview Industrial Park, which is expected to generate 380 new jobs and fuel the area’s recovery. General Motors also invested $263 million in a new engine line at GM Flint Engine Operations, retaining more than 410 jobs. And the $32-million renovation of the historic Capitol Theatre will significantly ramp up arts, culture and entertainment elements in downtown Flint, attracting both visitors and new businesses.

“We’re going to continue to move forward despite some negative headwinds,” exclaimed Herman.

Following Herman’s address, a panel discussion was held, which included Eric Larson, CEO of Downtown Detroit Partnership and Larson Realty Group; Will McClure, Jr., a student at MSU and youth minister; Beverly Walker Griffea, Ph.D, the president of Mott Community College; and Bob Waun, CEO of C3 Ventures Flint. The group discussed the state of Flint and the future each foresees for the area.

When asked by panel moderator Matt Franklin what the future of Flint looks like, McClure drew enthusiastic applause when he responded, “in the most humble possible way, me. I am the future.” It was an acknowledgment by both McClure and the audience that the energy and ideas of young entrepreneurs will play a major role in the future of Flint and Genesee County’s economic and cultural future.