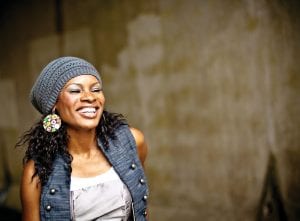 Mullen is here courtesy of reviveFLINT, a nine day celebration event based on the “good news” of the Gospel.

“I want the people of Flint to know they are loved. I want to get across that God knows them and loves them,” she says.

Mullen is a non-denominational gospel singer who is highly celebrated in the worship genre. She is a seventime Dove award winner and a two-time Grammy nominated vocalist who travels the world spreading “the good news” through song. In November she is slated to be inducted into the Christian Music Hall of Fame for which she said, “she is greatly hon-

The artist who, along with a close friend coined the term “Funkabilly” considers funk and country her favorite genres and greatest musical influences. This style inclination lends her songbook a distinct and refreshing element not commonly associated with Christian music.

This hybrid has resulted in comparisons to Alicia Keys, Lauryn Hill and Janet Jackson.

“I always tell people I am older than Britney (Spears), but younger than Janet (Jackson),” says the singer, whose serene laugh mimics the latter mentioned pop icon.

Mullen lives on a farm in Nashville, Tenn., with her three children and her husband, David Mullen, also a considerable force in the gospel genre. He produces her albums and shares a very communal sense of family with her on the land they share with extended family.

The collaboration between husband and wife proves symbiotic to the soulful songstress.

“I can give my husband a half-written song and he can sit down and finish it in my voice. God has been good to us,” she said.

Mullen was born and raised in Cincinnati, Ohio, where she recalls listening to Christian radio as a young child and writing the lyrics down with joy in her heart.

“After church I would stop women, many who were single mothers and sing a capella to them and they would cry,” she said.

“I knew I wanted to make music with a message,” said the singer, blessed with a voice made for soulful lullabies. There wasn’t a transition from pop recordings to the worship genre. This has been Mullen’s song of choice all through her life.

She reminisces about her childhood where she would wait for the bus by her home. She would lean next to the lamp pole and sing praise songs to God.

“I remember just having an open-hearted conversation with God every morning and most of the time it included a song. Even now I look back and think of how he heard me, how he listened to me, and how he took me seriously. It’s the fuel that keeps me working with kids and doing my best to convince them that God knows them. He sees them and that he has a plan for them.”

She goes on to say, “I am living proof that it’s true.”

With her Baby Girls Club, which she started unofficially more than 17 years ago, and officially eight years ago, Mullen helps less fortunate youth with homework, conflict resolution, and gives them activities to engage in like craftmaking, dance sessions and group singing.

“We love on them. We challenge them. We fight for them and sometimes, we fight with them,” she said.

The songbird also works with Team NCM, a talented youth group that participates in auditions to travel around the globe performing with Mullen on stage.

The new album, Captivated, debuts May 3. Mullen’s music can be purchased on iTunes. There is also a free Nicole C. Mullen app available for the iPhone.

Visit the singer’s web page at www.nicolecmullen.com for more information and links to her Facebook, Twitter, and Myspace pages.