Flint gets four of possible six points over the weekend 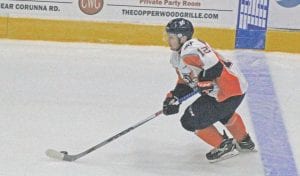 Flint’s Jake Durham skates the puck into the offensive zone.

FLINT – It was a pretty solid weekend for the Ontario Hockey League’s Flint Firebirds, winning two of three games to add four more points in the standings. Most recently, though, the Firebirds dropped a Sunday matinee to the Kingston Frontenacs at the Dort Federal Credit Union Event Center on Sunday, 5-3.

Kingston jumped out to a 2-0 lead near the midway mark of the opening period, scoring twice in just 23 seconds. Stephen Desrocher buried one and Sergey Popov followed him up almost immediately. Less than a minute after that, however, the Firebirds got it into gear when Luke Kirwan sent one toward the net and Ryan Moore, the OHL’s points leader, tipped it through the five hole.

Flint evened it up in the second period as Mathieu Henderson blasted a slap shot from the left face-off circle and rippled the mesh. That is, until Kingston quickly rebuilt their two-goal lead with tallies from Nathan Dunkley and Jason Robertson less than a minute apart.

The Firebirds would get back to within one early in the third period as a Jalen Smereck shot from the point was tipped in by Ty Dellandrea, but that would be it for Flint. The Firebirds couldn’t lock the score back up and Kingston’s Warren Foegele finished it off with an empty-net goal.

On Saturday night at home, Flint shocked the entire league by coming back and eventually dominating one of the league’s best teams, the Windsor Spitfires, 4-1. Windsor would get the only goal of the opening period from Gabriel Vilardi with only 35 seconds remaining in the frame. The second and third periods belonged to the Firebirds.

Midway through the second period, Everett Clark buried a wrist shot from the face-off circle to draw even, and a few minutes later, Kirwan did the same thing from the slot to give Flint its’ first lead of the night, 2-1. Dane Johnstone would get credited with a goal in the third period after being the final Firebird to touch it before Windsor accidentally scored on themselves. Hunter Holmes would get another empty-netter, his first goal of the season.

On Friday night, the Firebirds hit the road and upset another tough team, the Sault Ste. Marie Greyhounds, 4-3 in overtime. Each goal in the game was answered by the opponent in a back-and-forth affair. Clark scored the game’s first goal at 11;23 of the opening period by putting it under the goaltender’s arm after a great pass from Dennis Busby.

The Greyhounds would answer with a Morgan Frost goal with less than a minute left in the first. In the middle of the second, Flint grabbed the advantage back when Cullen Mercer scored on a wrist shot from the top of the face-off circle, but Bobby MacIntyre would tickle the twine late in the second period to tie it up again.

Early in the third, after a Greyhound fell behind the net and lost the puck, Kole Sherwood scooped it up and passed it backward to the front of the net where Clark would convert on a one-time for Flint’s third lead of the game. Once again, though, the Soo evened it up on a Hayden Verbeek goal, eventually forcing overtime.

The extra period would go in favor of Flint. With just 18 seconds left in the frame, Henderson’s wrist shot was just powerful enough to squeak past the goaltender and give the Firebirds the win.

Flint now stands at 7-5-0-1 for 15 points, putting them in fourth place in the West Division by just one point and seventh in the Western Conference, as well. In both situations, they are barely behind Windsor. The Firebirds begin a three-game road trip by traveling to Peterborough on Thursday, Kingston on Friday and Ottawa on Sunday.