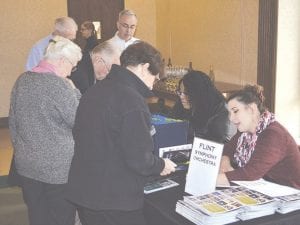 Flint Institute of Music supporters and members had the chance to gain exclusive access to upcoming FIM related performances and productions at the 2019/2020 Season Reveal Party.

The event, which was held in the FIM’s Anderson Room, gave guests a sneak peek at upcoming performances for the Flint Symphony Orchestra, the Flint School of Performing Arts and the Flint Repertory Theatre. FIM members and supporters also had the chance to renew and/or purchase season subscriptions.

Entering its 103rd season, the Flint Symphony Orchestra will be presenting an array of concerts, including its traditional Holiday Pops concert on December 21 and a special Pops concert on May 2, 2020. As part of its Music Around Town series, the FSO will also present a July 4 performance at Atwood Stadium, featuring music from The Beatles. 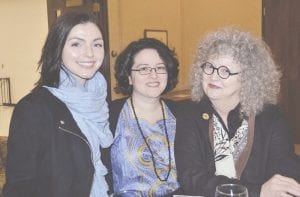 This June, the FSO and Flint School of Performing Arts (FSPA) will collaborate for a Chamber Music Series, presenting the works of Brahms, Beethoven and other legendary composers.

Davin Torres, Director of the FSPA, said that each concert in the chamber series will focus on a single instrument or one instrument section—such as a harp performance of French Impressionistic music and a wind performance of Beethoven’s “Septet in E-Flat Major.”

“The Chamber Music Series is a collaboration of the finest musicians in the Flint Symphony Orchestra and faculty artists from the FSPA,” she said. “The process of bringing them together adds an excitement, a spark that you don’t always see…because they’re bringing different things together.”

The FSPA will be presenting a rich performance season of its own, including a ballet production of “The Nutcracker” on Dec. 8. and a Bon Voyage Concert presented by the Flint Youth Symphony Orchestra on March 15, 2020.

A variety of FSPA summer camps and workshops are also open for registration, presenting intensive and beginner classes in music, ballet and dance for children and adults alike.

Following its premiere in fall 2018, the Flint Repertory Theatre will be rolling out another season of captivating plays, musicals and world premieres. Upcoming productions will include the family drama “The Effects of Gamma Rays on Man- In-The-Moon Marigolds”; the classic absurdist comedy “The Chairs”; and Steven Sondheim’s fairy tale musical “Into the Woods.”

“We found a whole new audience that was hungry for this kind of theatre,” he said. “We’re building on that momentum and trying to bring more diverse audiences to the Rep.”

For a full schedule of performances and season subscription info, log on to thefim.org. Additional production info can be found at thefso.org and flintrep.org, and FSPA class and registration info is available at thefspa.org.