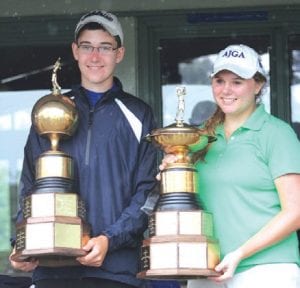 It was Zyber’s fourth straight victory in as many weeks, including championships in the Mancour Cup and Henrickson Award. The Mancour win qualified him for the Randy Wise Junior Open, an American Junior Golf Association event Aug. 19-22 at Warwick Hills.

Zyber played a bogey-free round in Wednesday’s rainy final to beat Schiller, a Mott Community College All-American. Schiller had led both days of stroke play with 1-under-par 71s Monday and Tuesday.

“I had three birdies and won a couple of those holes, and then he made a couple bogeys when I made pars,” Zyber said. “It was just a steady round — hit the greens and make a putt every once in a while.”

“She made a lot of putts,” Haylee said.