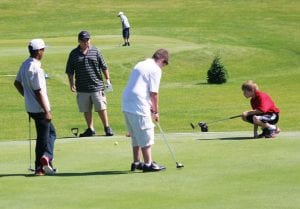 BURTON – When the Flint Junior Golf Association launched its first summer of youth play in 1939, “The Wizard of Oz” was a new release in theaters, FDR was only in his second term as president and a gallon of gas cost 10 cents.

Seventy-five years later, the FJGA is still going strong and celebrating its Diamond Anniversary. Online registration for the 2014 season began April 7 and will run through May 11 at www.fjga.org. The season will begin on June 23, one week later than originally scheduled because of the extended school year for some districts.

FJGA is recognized as the oldest and one of the largest junior golf programs in the country, with a current membership of more than 900 participants. Since its inception in 1939, the organization has provided an opportunity for young golfers to learn, play and enjoy a game they can play for a lifetime.

The program is open to boys and girls 8-18 who live or attend school in Genesee County. For the third year in a row, kids from Lapeer East, Lapeer West, Holly and Brandon are also eligible because those schools are part of the Flint Metro League.

The season will end with tournaments on July 28-29 for 5-hole and 9-hole divisions and Aug. 4-6 for the 18-hole division. The Jack Nicklaus Group again will have a triple crown of three elite tournaments – the Mancour Cup Challenge on June 30-July 1 at Flint Elks Club, the Mallon Cup Challenge on July 7 at Warwick Hills, and the Henrickson Award on July 14 at Atlas Valley

New this season, the 18-hole boys’ and girls’ championship flights will be awarded points for the top five weekly scores. Points will be totaled throughout the regular season to determine a regular season stroke play champion. There still will be a season-ending match play tournament champion.

The Flint Junior Golf Academy will provide seven pre-season clinics beginning May 28, which are also included in the entry fee.

On-line registration will be accepted by logging onto www.fjga.org and by following the registration directions. Registration forms will also be available at King Par Golf and local participating golf courses.